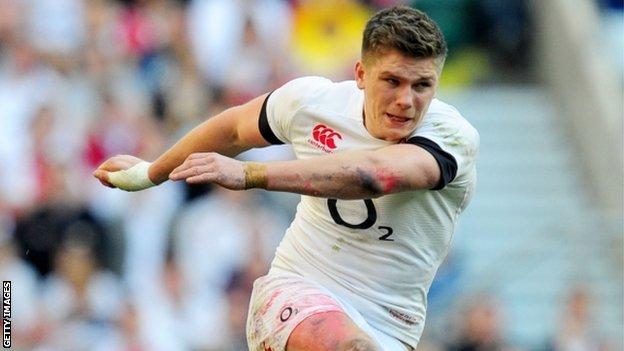 England coach Stuart Lancaster said he is likely to name an unchanged team for the decisive Six Nations meeting with Italy in Rome on Saturday.

Lancaster's men are in a three-way fight for the title with Ireland and France after defeating Wales 29-18.

"It would be hard to change the starting XV on the back of that performance," said Lancaster.

The coach is considering recalling powerful centre Manu Tuilagi to the bench in place of Alex Goode.

While an Irish win over France in Paris next week would almost certainly send the title to Dublin, a big English win in Italy and a narrow one for Ireland could yet see England top the pile.

If France, with far inferior points difference, beat the Irish, any England win should secure the title.

While Tuilagi is fit following a six-month lay-off with a torn pectoral muscle, 20-year-old fly-half George Ford is also pushing for a first start.

Lancaster, however, said Owen Farrell's superb display at No.10 against the Welsh demanded his re-selection.

"Owen played exceptionally well in every way, shape and form against Wales," he said.

"I've looked again at his performance and his defence, goal kicking and game management were was outstanding.

"His decision-making and calmness under pressure were excellent. It would be a tough call on Owen to leave him out.

"George has great potential and opportunities will come his way. I've pencilled in at least one game he's definitely going to start, if not two. His chance will come."

On Tuilagi's chances, Lancaster added: "If we were to go down the route of using him on the bench he'd certainly have a big impact.

"We didn't feel that it was right to involve Manu against Wales because of his lack of training time with us. We'd be more comfortable bringing him in for this weekend.

"I haven't spoken to any of the players yet and there's someone who would lose their spot on the bench if that's the route we go down.

"One option is for him to cover wing and we have both Jack Nowell and Jonny May who can cover full-back."