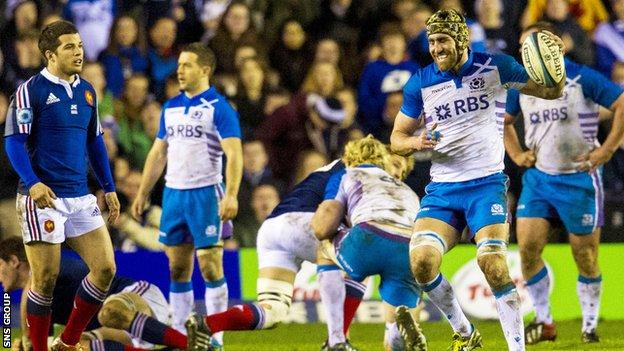 Captain Kelly Brown wants to see Scotland reduce their penalty count in their final Six Nations encounter away to Wales on Saturday.

"We've looked at the discipline issue very closely and we know we need to improve," Brown told BBC Scotland.

Over the course of the Six Nations, we've definitely moved forward

"We are aware that we are conceding far too many penalties."

Scotland conceded 13 in Saturday's 19-17 loss to France, taking the total for the four games played in the tournament to 51 - the most of any team.

"It's a high pressure game and all of the guys are trying to give their absolute best," added Brown. "But it's also about learning all of the time and that's what we're trying to do."

If Scotland win in Cardiff, they will match last year's points haul, but Brown is nevertheless encouraged by the progress being made after an unconvincing start.

"Over the course of the Six Nations, we've definitely moved forward," said the 31-year-old.

"We have improved hugely and a number of young players have come in. They have had a run of games and gained more experience and that will leave us in a good place."

Interim head coach Scott Johnson came in for stinging criticism after disappointing defeats to Ireland and England, with Brown dropped from the squad following the opening loss in Dublin.

A win was secured in Italy thanks to a last-ditch drop-goal and Scotland ran in two tries against France at the weekend, with Brown recalled, but contrived to lose the game in the closing minutes.

"Saturday was hugely disappointing," reflected the Saracens forward. "I thought we were in control for the vast majority of the game.

"We did so much good stuff over the course of the game, so we've taken a lot of confidence from that."

Scotland have not won in Wales since 2002 but Brown expects the home side to bounce back after being beaten by Ireland and England.

"This weekend is going to be very tough," he said. "Wales are the reigning champions and they're off the back of a disappointing performance against England.

"I expect them to come out breathing fire and it's up to us to match that and to make sure we impose ourselves on them."