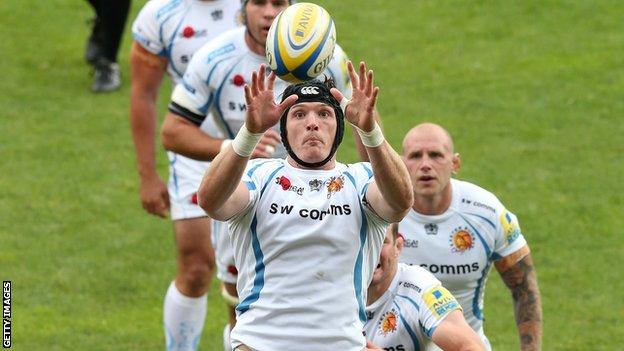 Exeter Chiefs lock James Hanks is set to miss the rest of the season with a neck injury.

The 29-year-old suffered the injury in Sunday's 22-19 win at Bath which took the Chiefs into the LV= Cup final.

Hanks was taken to Frenchay Hospital for assessment, where he was diagnosed with a compression of the neck.

"It was pretty scary for him at the time when the initial injury happened but there are no fractures or breaks," said Chiefs head coach Rob Baxter.

"He has got some swelling in his neck area.

"He's still in hospital for monitoring rather than for treatment. He's OK and he's improving and there's no indications there's going to be any long-term damage."

Hanks came on as a replacement for Damien Welch after 53 minutes at the Rec, but was himself replaced by back-rower James Scaysbrook with four minutes of play remaining, with the game held up while he was treated on the pitch after taking the ball into contact.