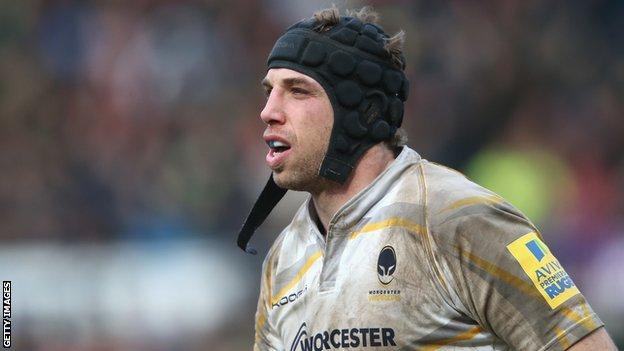 Worcester Warriors will be without back-row Leonardo Senatore for the rest of the season and winger Dean Hammond for at least a month through injury, as they fight for Premiership survival.

Senatore, 29, has had an operation on his shoulder following Warriors' narrow 21-20 defeat at Harlequins on 1 March.

Hammond, 21, was also injured against Quins and could be out of action for up to six weeks.

Warriors seem certain for the drop after losing 21 league games in a row.

"He had an operation a couple of days ago and will miss the remainder of the season.

"Dean is four-to-six weeks so it starts to stack up."

Senatore joined Warriors from Toulon in the summer of 2013 and has played 12 times in all competitions this season.

South African Hammond joined the Worcester Academy set-up in September 2013 and has made 15 appearances in his breakthrough season at Sixways.

He made his Premiership debut against London Wasps and scored his first try for the club in their Amlin Challenge Cup game against Biarritz in December.

Warriors must now do without the pair as they fight to stay in the Premiership - a task that is looking more and more unlikely with the club still winless so far in 2013-14 and marooned at the foot of the table.