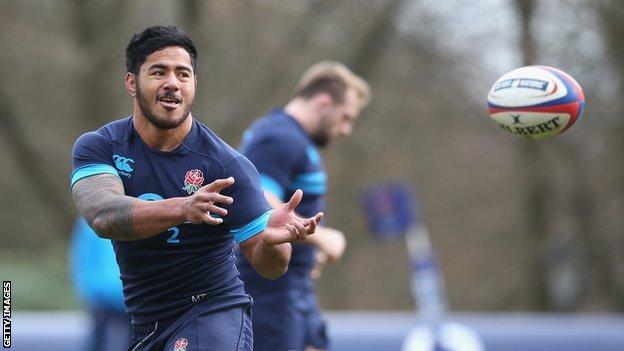 Manu Tuilagi has been named in an England squad for the first time in a year after recovering from injury.

The Leicester centre will start on the replacements bench for the Six Nations game against Italy on Saturday.

Tuilagi, 22, will replace Alex Goode in the one change to the 23-man squad that beat Wales 29-18 at Twickenham.

"Manu trained well with us last week and today and is up to speed with the way we want to play," England head coach Stuart Lancaster said.

"Alex Goode has done well for us off the bench and is naturally disappointed but we believe Manu, with the power and physicality he can bring, is the right choice to be included in the 23 for this game."

Tuilagi tore a pectoral muscle playing for his club Leicester in September, and missed the whole of the autumn series.

He returned for the Tigers against Newcastle at the beginning of the month, playing 70 minutes in a 41-18 victory at Kingston Park, and his work in recent training sessions has convinced the England coaching team that he is ready for a return to the international fray.

England in the 2014 Six Nations

"You can't ignore what Manu can bring to the game with the ball in hand, and his experience," assistant coach Graham Rowntree told BBC Sport.

"He's done famous things for us, he's a British [and Irish] Lion, and he's fit and raring to go.

"We sat down as a coaching group and decided the time is right. He's had a bit more time working with us, getting back into the groove with how we do things, and that's why he's in."

With Luther Burrell and Billy Twelvetrees impressing in the midfield, there is a chance Tuilagi will be deployed on the wing at some point in Rome, but wherever he plays Rowntree is confident he can make an impression as a replacement.

"Where he comes on, that's another discussion to have, but we're fairly sure he can come on and make an impact which is what you need from your bench," he said.

England can win the Six Nations if results go their way on Saturday. If they win and France beat Ireland, England are likely to be champions - unless the French win is very emphatic.

However, England will need to beat Italy heavily to surpass Ireland on points difference, should the Irish triumph in Paris, but Rowntree insists England will not go to Rome chasing a big points total.

"It's win first - there aren't many teams who go over there and put many points on them," he said.

"The last time we were there we snuck out of there with a four-point win, so there is a lot there to respect.

"We want to go out there and win the game, we get that right and everything else will take care of itself."

However, regardless of where England finish in the final table, Rowntree believes this year's Six Nations has seen the side take a considerable step forward.

"I think we've answered a lot of questions, in terms of where we are as a group," he said.

"What we have seen is what we can do, and it's now for us to do it consistently, put in big performances week in, week out.

"We will never be happy unless everything is at 100%, and we've won everything we can."