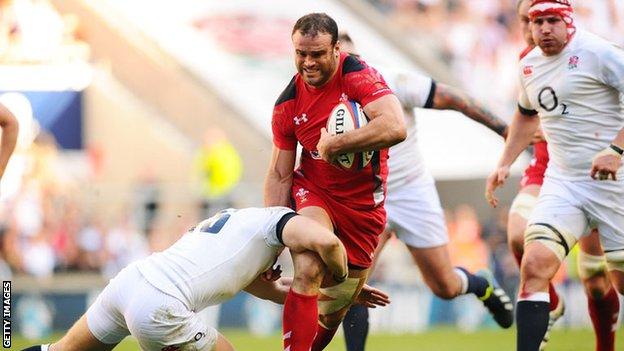 Centre Jamie Roberts has rejected claims that Wales are predictable.

Wales slipped out of the running for the 2014 Six Nations championship after a 29-18 defeat against England at Twickenham.

Their kicking strategy has attracted criticism ahead of their final match of the tournament against Scotland in Cardiff, but Roberts disagrees.

"We like to stay unpredictable on the field, but we took the wrong options on the weekend at times," he said.

Defeat at Twickenham finally ended any hope of a third successive Six Nations title for Wales.

And the contrast between the Welsh tactics and England's high-tempo game further underlined the criticism.

But the British and Irish Lions centre believes it was the execution of the tactics, rather than the game plan itself, which was at fault at Twickenham.

"You watch the game back, and what we've done in training and practised we haven't done it to the best of our ability on the weekend, and that is annoying," he added.

"We created problems in England's defence and we just haven't chosen the right option when we've been presented it, and we all have to shoulder the blame for that.

"I am not pointing any fingers at anyone else. I was to blame, myself, on many occasions on the weekend.

"Our game-plan, people will say it's quite predictable, but it definitely is not."

Wales missed an uncharacteristic number of tackles in the England game, and were caught off guard for England scrum-half Danny Care's opening try.

For 57 times-capped Roberts, the buck stops with the Wales players.

"A lot of us players, myself included, have been round a while and it's not about coaches pointing the finger any more," he added.

"It is about us players putting our hands up and admitting we were poor and searching deep within ourselves to raise our game for this Saturday.

"Obviously, we can't win the championship this year, and that hurts massively, especially when you have put so much effort in.

"I don't think we did ourselves justice in a lot of parts of the game (on Sunday).

"We turned the ball over quite a few times, which wasn't great, and then a few of us, myself included, have kicked the ball away in the opposition 22. It hurts when you look back at that.

"It was a poor one, as were many of the decisions by a lot of us on the pitch. I just have to get back to training this week. You train harder, you look forward to your next game."