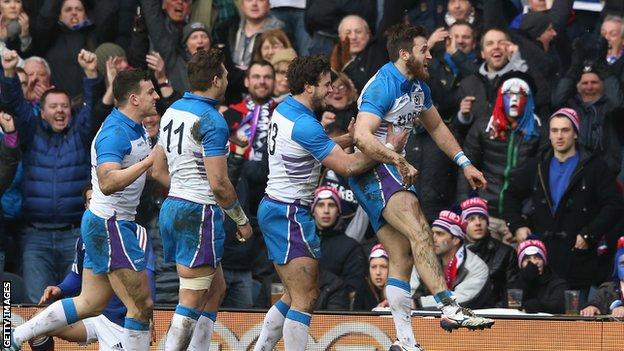 He will wait until Thursday to make his selections for the game in Cardiff because of injury concerns over wingers Tommy Seymour and Max Evans.

In the meantime, the Australian has named 13 backs for the final match of the 2014 campaign.

In the forwards, Johnson has restored Ryan Wilson to the back row in place of the injured Johnnie Beattie.

Can we go down there with a different group of players and compete? Yes. Will we? Yes

The Scots are seeking to end their campaign on a winning note following defeat by France at Murrayfield. and defeat Wales for the first time in 10 years.

Flanker Alasdair Strokosch returns to provide cover on the bench for the Scots, who will be aiming to secure their second win of the championship.

Prop Alasdair Dickinson has recovered from the calf injury he sustained in Rome last month and is also among the substitutes.

Johnson said: "We're already without Sean Lamont in the backs after the knee problem he picked up against France.

"We've also got some concerns about our wingers, Tommy Seymour and Max Evans. We're going to wait until tomorrow to see how they are.

"It is the reality - at this stage of the tournament you get bumps and bruises, but you expect that and Wales will be in the same boat too.

"If it provides someone else with an opportunity, that's not a bad thing."

Johnson was pleased with the performance against France but admits to frustration at the result.

The Scotland coach believes his side should have won that game "convincingly" - along with the previous one, when they narrow edged out Italy.

"We've got to live by that and it would be nice to put in a performance against Wales," he said.

"They will be hurting from their loss and they are now out of the championship, so it is two sides that are hurting and wanting to put on a good performance and we're looking forward to it."

Johnson believes his squad now has the necessary strength in depth to compensate for any more injury absentees.

"At the moment, we are going to have quite a few of our team under duress, injury-wise, and not available for selection," he said.

"Yes, we've missed some players, but it's given other people a chance.

"So can we go down there with a different group of players and compete? Yes. Will we? Yes.

"What I'm asking for is a bit more consistency. If we get the consistency, the scoreboard will look after itself."