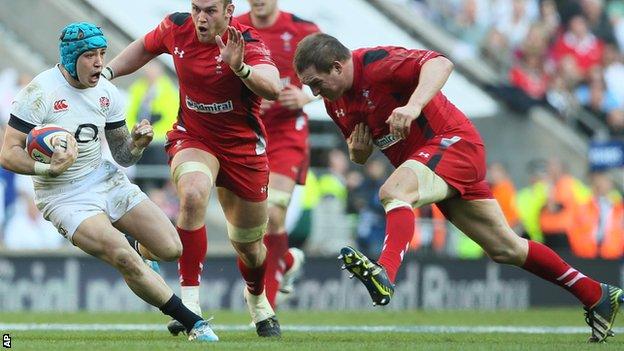 In his BBC Sport column, Adam Jones bemoans the Six Nations defeat by England that ended Wales' title hopes, gives his verdict on fellow prop Gethin Jenkins after he was sin-binned and looks ahead to Saturday's final game with Scotland.

We honestly went up to Twickenham full of confidence. We trained very well all week and we've kind of worked out now that if we train well, we play well.

Obviously we didn't turn up, we gave them two soft tries - a bit of quick thinking by England scrum-half Danny Care and a malfunction in the line-out led to our 29-18 defeat - but England were excellent.

We were disappointed in ourselves, in how we approached the game.

When we did have the ball, England gave penalties away and Leigh Halfpenny kicked everything, but we never actually got any momentum due to the fact we didn't go through any phases.

Our forwards coach, Robin McBryde, has come out in the press saying the Welsh coaches have a few issues with how the scrums have been refereed.

For me, having looked at the scrums, there was one scrum we were illegal, we pull-wheeled it and that was a definite penalty.

Obviously I'd be a bit biased towards our loose-head prop Gethin Jenkins, but he was very harshly dealt with to be sin-binned again.

If you're saying that Gethin was driving David Wilson across, then he could only do that if the tight-head was doing that himself.

If the tight-head scrummages straight you can go down, you can go backwards, or you can go up but you don't go in.

At the end of the day England were clever - we wanted to attack that area after seeing how Ireland went after them.

We thought we'd get a bit of change out of that but obviously the referees saw differently.

Referees are all extremely professional so they'll watch props, they'll see different traits, how they scrummage, where they bind, whether they bore in, stand up or go down.

I've had refs saying to me; 'I want you to bind longer today' in the changing rooms before the game, so there are obviously things they pick up on.

I think what [Wales forwards coach] Robin's referring to is that the International Rugby Board has sent out video clips of the scrum and has picked up on different players individually by name, highlighting what they do.

I'm not massively sure that's the right way to go about it because that already puts them in the referee's head... you've got to judge every scrum as an individual scrum.

Regardless of the two yellow cards Geth has had during this Six Nations, for me he's probably the best northern hemisphere loose-head in the last 20 or 30 years.

You don't get more than 100 caps and three British and Irish Lions tours for nothing, so he'll get over it. He's very self-confident.

Geth might be seen now for getting the yellow card against England but it would be incredibly harsh on him if people forget what he's done in the last 11 years.

He's obviously the best Welsh prop ever, more than likely among the couple of best loose-heads ever to play and it's a massive achievement to become the most-capped player.

I just hope people give him that recognition rather than go: 'Oh, he's had a couple of yellow cards now so let's slag him off'.

We've played together for the past decade and you become very good friends.

I think everyone knows he's a bit grumpy, it's well documented he's quite miserable! Once you get past the grumpy, miserable exterior he's a good guy.

But over the last few years he's taken on more of a leadership role, he speaks more... he's the one I think that our captain Sam Warburton would go to for any advice.

He's got a very good understanding of the game, he will quite happily challenge coaches with stuff just because he's a really, really good rugby player.

Not giving up without a fight

I'll be winning my 94th cap on Saturday - if selected - and getting to 100 caps has been something I've wanted to do for a while.

Perhaps this season has made me think, down here you get a lot of press criticising you - especially me and Geth because of our age and so on.

I'm fully aware these young boys are coming through but I still want to be first choice and they can have my spot when I'm ready to give it to them, when I'm finished.

I'm not going to give up my place without a fight and it's a big goal for me to get to 100 caps.

The World Cup in England next year is a goal for both of us. We haven't written ourselves off yet even if others here in Wales have.

It's a big goal, both of us will have played in four World Cups then if we get there.

Clash of the coaches

For us Ospreys boys in the Wales squad, Scotland on Saturday is a massive game because we've got Jon Humphreys coming back coaching the Scottish forwards.

He coached the majority of the Ospreys like myself, Alun Wyn Jones, Richard Hibbard for the best part of the last 10 years, so there's a chance to get one up on him.

But also it's for people like Dan Baugh, the Wales conditioning coach, who is leaving at the end of the year.

You want to send him off with a win because he's been a big part of our game and our set-up.

I remember playing against Dan and he was a bit of a berserker, but he's a great bloke and he's been excellent for us, so it will be sad to see him go.

It'll be easy to get up for the Scotland game, you want to finish on a high and Saturday in Cardiff is no better place to do it.