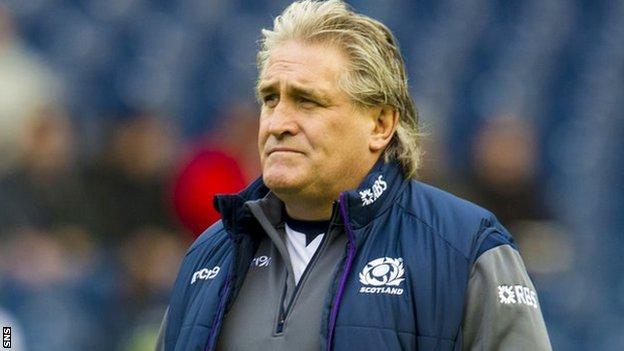 Scotland are seeking clarification from referees as to why they are being penalised more than the other teams in this season's Six Nations.

Scott Johnson's side have conceded 51 penalties so far in this championship - averaging more than 12 a game.

"We don't walk away from the fact we've got to do our part right and we need to improve a couple of things," he said.

"But the rules have got to be applied to both sides. Letters have gone into appropriate people."

Johnson's words were echoed by next opponents Wales, whose forwards coach, Robin McBryde, expressed his fear that loose-head prop Gethin Jenkins' scrummaging is being singled out for punishment by referees.

Jean-Marc Doussain's late penalty at the weekend condemned Scotland to a defeat at home by France in a game Johnson believes they should have "won convincingly".

"We've got to look at ourselves and we've got to be clear - there are some errors in our game, there's no doubt about it," the coach told BBC Scotland, complaining about the "ambiguity" in applying the rules.

"What frustrates coaches like myself is the fact that the consistency of the referees is not being applied to both parties."

Johnson, who will concentrate on his director of rugby role from the summer, has been in temporary charge of Scotland while prospective head coach Vern Cotter runs down his contract with French top-flight outfit Clermont Auvergne.

The penalty count aside, the Australian believes he will had over the reins to an improving Scotland.

Johnson thought the weekend performance against France was "very good" despite a narrow defeat.

"It shows we're getting strength in depth," he said ahead of Saturday's visit to Wales. "I thought the last couple of weekends have been really good from a rugby perspective."

The Scots are seeking their second win of the Six Nations, having won narrowly against Italy in Rome before the dispiriting reverse against the French.

"We've played all the rugby and didn't get the reward in the last game," he said. "We should've won both of those games quite convincingly on the skill set we displayed. We didn't."

Johnson has been criticised in the media for some of his team selections but stressed that his decisions have been designed to help Cotter prepare for next year's World Cup.

"Everything I've done is to benefit Scotland rugby through the World Cup and beyond," he said.

"We've seen the development of some players that are coming through - they have time in the saddle.

"What we'll get in the next 12 months is more consistency.

"If we get consistent over a longer period of a game, we'll be in any competition."