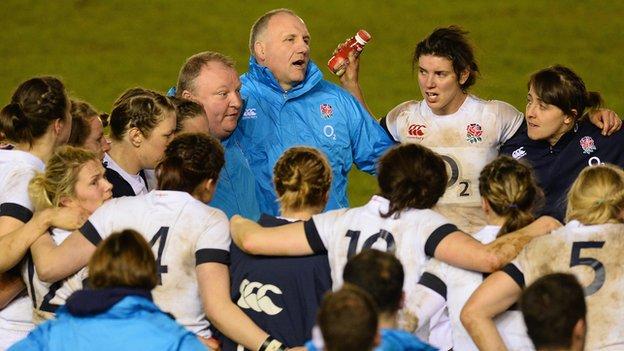 England head coach Gary Street has made 11 changes for the Women's Six Nations match against Italy on Sunday.

England need Ireland to beat France on Friday night to retain any hope of winning of the Six Nations title.

"We have not weakened the squad at all but given it a fresh boost before our last Six Nations game," Street said.

"Having such depth of quality players in our squad does make it a challenge to keep consistency but, as this is our last game before the Rugby World Cup, we have got to give players game time."

England won the Triple Crown with victories over Scotland, Ireland and Wales but suffered an 18-6 defeat against France in their Six Nations opener in Grenoble.

France lead the table with four wins from four matches going into the final weekend. Ireland are in second place on six points, ahead of England on points difference.

Full-back Danielle Waterman, who has 54 caps and has competed in two Rugby World Cups, will start her first XVs game in 16 months in Italy.

Richmond wing Natasha Brennan will make her first start for England after coming off the bench against Wales on her debut and scoring with her first touch of the ball.

"It's great to have back a fully fit Danielle Waterman, who I hope can add something different to the team, while Natasha Brennan very much impressed on her debut last week and it is vital we see more of her," Street said.