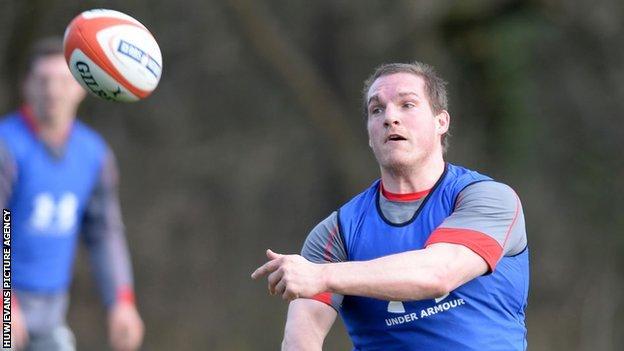 Jenkins, 33, has been sin-binned for scrum offences in his last two matches, raising questions about his chances of breaking Stephen Jones' Wales record.

But Williams - one of only four players to win 100 Wales caps - believes Gatland will stick with Jenkins.

"As a player his rugby brain is second to none," said former flanker Williams.

"He was man-of-the-match against France, [when] we destroyed the French scrum."

Gatland names his team to face Scotland at the Millennium Stadium in the Six Nations championship at 11;00 GMT on Thursday.

He will have to make at least one change after full-back Leigh Halfpenny dislocated his shoulder in the 29-18 defeat by England.

New Zealander Gatland has also hinted he is considering further changes after the Twickenham game, which ended Welsh chances of a third consecutive title.

"I think there is potentially a chance to look at one or two guys," Williams said.

"There have been players coming off the bench who have done a really good job for us.

"Maybe they deserve the opportunity and a reward for their good displays."

Ospreys fly-half Dan Biggar and Scarlets hooker Ken Owens both impressed off the bench against England and could be in line for a call-up.

If selected in place of Scarlets fly-half Rhys Priestland, Biggar would also have to shoulder the burden of place-kicker with Halfpenny ruled out.

Scarlets utility back Liam Williams is likely to be drafted in to replace Halfpenny at full-back, after coming on twice in the tournament so far.

Welsh tactics and their performance have come under fire after the loss to England.

But the punishment of Jenkins' scrummaging has been a major headache for the Wales management, with forwards coach Robin McBryde claiming the player was being singled out by referees.

However, Martyn Williams believes Jenkins' importance to the team means he'll get the selectors' vote.

"We've won four championships with him as a loose-head and trust me, as a player his rugby brain is second to none.

"If you take Gethin out of that side I think we're struggling maybe for a bit of direction and that's why he keeps getting the nod."