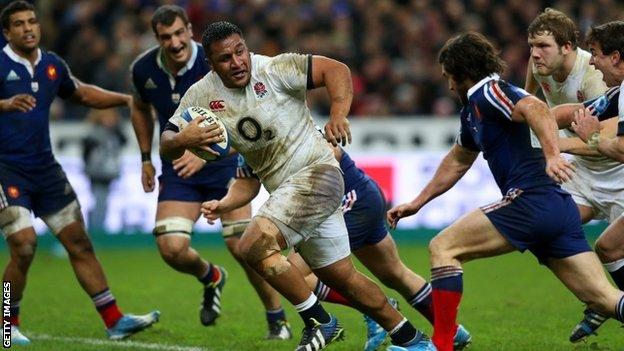 Mako Vunipola will start at loose-head prop for England in Saturday's Six Nations match against Italy in Rome.

The 23-year-old Saracens forward replaces Harlequins prop Joe Marler, 23, who is with his partner waiting for the birth of their first child.

"We have prepared for being without Joe - it is important he is with his partner at this exciting time," said England head coach Stuart Lancaster.

"Family must always come first and everyone in the squad wishes them well."

Vunipola's inclusion is the only change to the starting XV, although 22-year-old Leicester centre Manu Tuilagi also comes onto the bench in place of Saracens' Alex Goode after recovering from injury.

Second-placed England retain a chance of winning the title on the final weekend, although Ireland lead the standings on points difference.

Lancaster's side beat champions Wales 29-18 at Twickenham on Sunday to keep the pressure on the Irish, who travel to France on Saturday.

He said: "Rome is a fantastic opportunity for us to finish the Six Nations on a high point. We want to put in a performance that backs up the previous performances. That is a big motivation for the players."

British and Irish Lion Tuilagi can play on the wing as well as at centre and could make his first appearance for England in a year.

He has been capped 21 times and has scored 50 international points but has played only 70 minutes for Leicester since recovering from a torn pectoral muscle that kept him out for six months.

"It is great to be back with the England boys, joining in and trying to continue the good work," said Tuilagi. "I know I have only had one game but I have been working hard and training hard.

"It has been a long time - now I'm really excited to be playing in a tough game on Saturday."