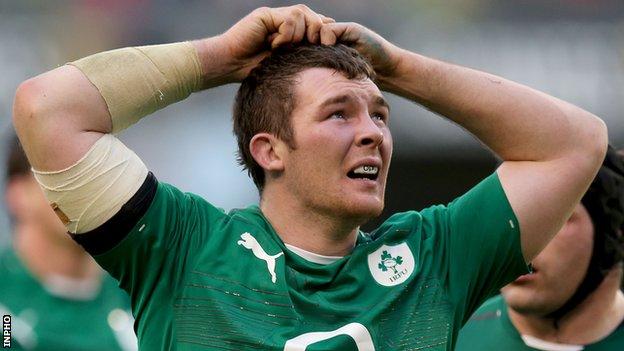 Peter O'Mahony is back in the Ireland team for Saturday's crunch Six Nations game against France in Paris.

The flanker's return in place of Iain Henderson is the only change from the team that started against Italy.

O'Mahony, 24, sustained a hamstring injury in the defeat by England and was not risked last weekend.

With Henderson in the replacements, Rhys Ruddock drops out while Ian Madigan's versatility sees him edging out Paddy Jackson for a bench role.

Leinster utility back Madigan can play at full-back, centre and fly-half, and coach Joe Schmidt has opted to recall him to the squad while Jackson will play for Ulster against the Scarlets on Friday night.

Schmidt said Jackson would have started at fly-half had Jonathan Sexton not been fit.

"Ian is a very good player and he does give us coverage through the midfield and at full-back," added the Ireland coach.

"It's been a pretty combative campaign - we just started to creak a little bit, so we just needed the coverage.

"In England we got a couple of niggles, and we didn't have as broad a coverage on the bench as we would have liked."

Madigan, 24, has only made 11 starts for Leinster this season where he has been battling for the number 10 jersey with Jimmy Gopperth.

However, Schmidt has backed the Leinster fly-half to handle the Paris occasion if he is called into action.

"He played through the autumn and he has trained with us for the full eight weeks throughout this tournament."

Scrum-half Conor Murray has been passed fit to start for the Irish after a stomach upset led to him being replaced in the first half of last weekend's game.

Retiring centre Brian O'Driscoll will make his 141st and final Test appearance for the Championship-chasing Irish in Saturday's game.

With England facing Italy in Rome earlier on Saturday, Ireland will know exactly what they have to do to win their first title in five seasons.

If England are unable to win by more than 50 points, a victory of any margin in Paris will be sufficient to secure the title for Joe Schmidt's side.

O'Driscoll's hat-trick of tries helped Ireland earn their last Paris win back in 2000.