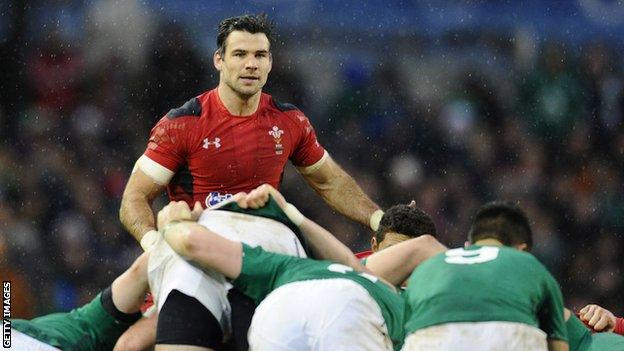 Mike Phillips wants to give Welsh fans something to cheer when Wales take on Scotland in the Six Nations in Cardiff.

The 84-times capped scrum-half returns to the starting line-up in place of the injured Rhys Webb, after being dropped to the bench for the 27-6 win over France and 29-18 defeat by England.

And Phillips, 31, is determined to help Wales salvage a disappointing campaign.

"It's great to have the opportunity again to play and hopefully it can be a great day for Wales," he said.

"Nobody likes to be put on the bench and out of the team. It's not nice is it?

Match fact: Has never lost against Scotland, with Wales winning six times when he has faced them

Wales came into the 2014 Six Nations tournament as defending champions, but defeats against Ireland and England mean they cannot retain their title.

Coach Warren Gatland has made six changes to the team which lost at Twickenham for the visit of the Scots on Saturday, with the scrum-half returning to the starting XV for the final round of this year's tournament.

He was criticised after that match for getting involved in personal battles and losing his discipline.

The Racing Metro player then made appearances off the bench against France and England, when Ospreys number nine Webb started.

"Rhys has played well and I suppose you have to look at other options as well with the World Cup coming up," conceded Phillips.

"And I think it's important that I'm not going to go out there [against Scotland] and try too much - just do my role and be there for the boys and do what I've always done really."

Phillips' physical style and abrasive on-field personality have been a cornerstone of Wales' success under coach Warren Gatland.

And he will be renewing his half-back partnership with former Ospreys team-mate Dan Bigger, who is selected to face Scotland ahead of Rhys Priestland.

"I've played with Dan in the Ospreys for a few years and he played really well last year in the Six Nations," said Phillips.

"But Rhys is just as talented as well - and James Hook too. We're blessed with talent in Wales in that area and Dan's got his chance.

"He's a young man with an old head on his shoulders, so hopefully we can control that area well and give opportunities to people outside."

Whatever happens against the Scots, Phillips accepts that the season has been a disappointing one for Wales.

"There's still confidence there. We've made some silly mistakes - we've just got to cut out those silly errors and just do the basics really well and the talent will flow through then.

"It's important with the tour [to South Africa] coming up in the summer to get a win.

"And it's important for the loyal fans too. We've got to give them a win and something to shout about at the weekend."