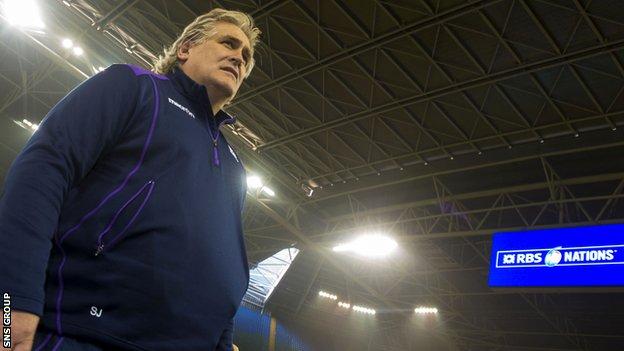 Scott Johnson is relishing the opportunity of seeing his Scotland players tested in the Millennium Stadium "hot house" on Saturday.

The interim head coach will take charge for the last time as the Scots seek a first win in Wales since 2002.

"This is a fantastic place, one of the world's best," said Johnson.

"We want a good show. It goes without saying you would love to win, but if we win ugly we will acknowledge that we didn't play well."

Scotland arrive in Cardiff following an improved second phase of this season's Six Nations, responding to comprehensive defeats against Ireland and England by beating Italy and losing narrowly to France.

Former Wales caretaker coach Johnson will move to a director of rugby role this summer, with New Zealander Vern Cotter taking over team matters once he completes his contract with Clermont Auvergne at the end of the season.

"We want a good performance and, to be fair, I think we need one to win," added Johnson.

"It is a unique experience. They love their rugby down here [in Wales], they are passionate people, and it is a great thing to be able to say you've done.

"It's a great place. There are some great memories and it is nice to be back."

Wales boss Warren Gatland applauded the Scots earlier this week for agreeing to the stadium roof being closed on Saturday and he fully expects them to play in a positive fashion.

"We wanted the roof shut," explained Johnson, who is giving a first cap to winger Dougie Fife in Cardiff.

"It was built so that people could see a performance and rugby showcased in the best light it could possibly have.

"That is what I stand for and that's what I want these players to learn and be able to say they have done that. We are going to have a look at how they react in certain conditions, because this is a hot house. That's the beauty of it.

"It can work in your favour, it can go against you. We are going to find out about a few players and that's a good thing."

Johnson believes Wales remain highly-dangerous opponents despite losing their status as champions after defeats by Ireland and England.

"Wales will be disappointed with the results, but they haven't been far off either," he added.

"Twickenham and Ireland are hard places to go and win and this tournament is so tight. Their form is not as bad as everyone keeps saying it is.

"I think they are a wonderful rugby side and, over the last five or six years, they have done wonderfully well. Not too many have come here and won. They are the champions and they are hurting.

"It's a Test match to show your wares. It is an important game. There is no such thing as a dead rubber, not at all."