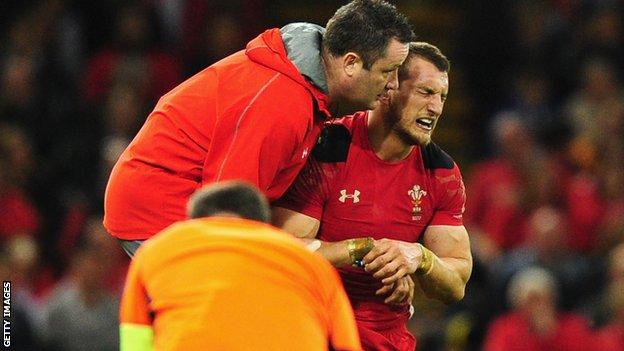 Wales captain Sam Warburton will; miss the summer tour to South Africa after dislocating his shoulder in the 51-3 win over Scotland.

Warburton suffered the injury towards the end of the game in Cardiff.

He is to have an operation to repair the damage and will be out of action for up to four months.

Warburton's Cardiff Blues team-mate Leigh Halfpenny will miss the rest of the season and has already been ruled out of the South Africa tour.

The 25-year-old full-back has had surgery on the right shoulder he injured during Wales' 29-18 defeat against England at Twickenham.

Defeat at Twickenham had ended Wales's title hopes and coach Warren Gatland admitted his side had been inconsistent during the campaign.

But the New Zealander was pleased with the performance in their final game, their third home win of the championship.

"We've been very honest with ourselves and we know in this tournament we've been a little bit inconsistent," Gatland said.

"Again I thought the players responded exceptionally well today and it was a good display out there."

The Wales head coach said the first half sending-off of Scotland full-back Stuart Hogg was the correct decision by referee Jerome Garces.

The referee initially showed Hogg a yellow card for a late shoulder charge on Wales fly-half Dan Biggar, but changed it to a straight red after watching a replay on the stadium screen.

Gatland said there was no malice in Hogg's challenge but Wales took full advantage against 14-man Scotland.

"You've got to feel sorry for Stuart - he's not that sort of player at all. It's a rush of blood to the head and he's made a mistake," Gatland added.

"I don't think you'll see that from him again. It was just a mistake. From our point of view, there's no hard feelings.

"You've got to be ruthless and I think we were ruthless from that point on. Even before that, I thought we were reasonably comfortable with the way the game was going.

"I don't think Scotland could cope with our physicality, whether it was in attack or in defence."