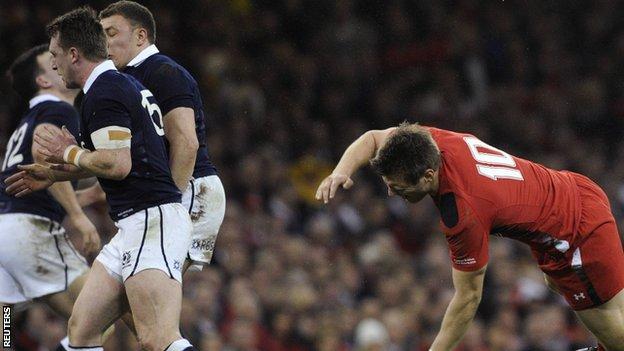 Wales went on to win 51-3 following Hogg's dismissal on 23 minutes for throwing his shoulder into Dan Biggar.

"Stuart might be many things, and one of them is a great character, but he certainly isn't a dirty player, that's for sure," said a dejected Johnson.

"He's already been in to apologise to Dan Biggar and the referee."

Johnson - taking charge of his final game before he is replaced by Vern Cotter as he moves to a director rugby role this summer - insisted that Hogg's actions in Cardiff were "totally out of character".

I won't question the character of the boys, I just won't do it.

"He's really down about it," added the Australian. "He's taking it tough. He's an emotional lad and that emotion is a good thing, and in this case he is feeling he has let the boys down.

"He's got to face reality that he has been caught doing something. He's in a dark place but that's just life. He has got to confront it."

The visitors were already one try down following Liam Williams dive in the corner when Hogg became just the third man ever to be sent off for Scotland.

And they slumped to their biggest-ever losing margin in the tournament as George North and Jamie Roberts both scored doubles to add to the touchdowns from Taulupe Faletau and Rhodri Williams.

Asked if the sending-off was the turning point, Johnson said: "It wouldn't have been the same result, as in the scoreboard.

"I thought we were in the contest but full-back is a hell of a position to fill for that length of time. If it's a forward you can cover it but it's harder to cover a back division player, and once they were on a roll they played some pretty good rugby, too.

"But it felt like there was a lot of field to cover and was difficult for us."

Hogg was initially shown a yellow card before French referee Jerome Graces saw the incident on the big screens and upgraded his punishment to red.

But Johnson refused to take issue with the unusual way the decision was reached.

"I work on the theory that they are paid to do their job," he said. "As soon as I saw the yellow I was thinking of something else. I can only do what is put in front of us there, so the judicial stuff I'll leave - my job is to compete on the back of that. He's a good referee and a good adjudicator."

Johnson, who oversaw two wins in the tournament last year, came in for fierce criticism following dismal defeats to Ireland and England this time before some pride was restored by beating Italy and narrowly losing out to France.

The heavy defeat in Wales is a major step backwards for a team low on confidence but Johnson continued to praise his battered squad.

"I won't question the character of the boys, I just won't do it," he said. "They're tough lads and their character is undeniable."