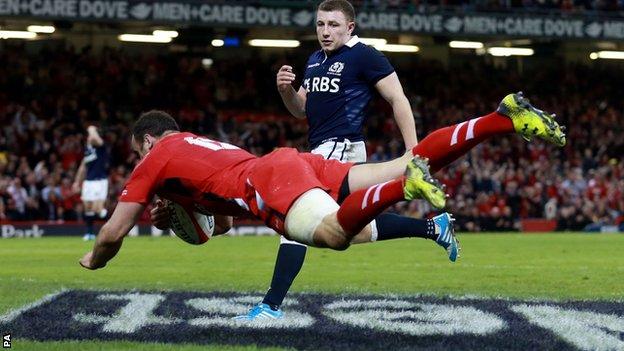 There was a peculiar feeling in Cardiff even before Wales' ruthless and record-breaking Six Nations demolition of 14-man Scotland.

It did not rain in the Welsh capital but they closed the roof of the Millennium Stadium anyway, creating a strange floodlit twilight on a bright spring day.

Gethin Jenkins broke the Welsh international appearance record as he won his 105th cap, but did not lead the team out as is usual on these occasions.

And, most peculiar of all, Stuart Hogg - a dazzling runner and not normally a bruising aggressor - committed a high, late tackle on Wales fly-half Dan Biggar so out of character that even referee Jerome Garces did a double take.

Sadly for Hogg and Scotland, after his second look on the stadium's big screen, Garces decided the yellow card he had already shown the British and Irish Lion full-back was insufficient punishment for his misdemeanour.

A red card, he decided, better fitted the crime and from that moment Scotland were doomed - in the best Dad's Army sense of the phrase. The score was 10-3 at the time - it finished 51-3.

The immediate problem for Scotland was how to keep Wales' powerful backs at bay while short of a defender for an hour. They couldn't, which was not surprising.

"At 13-3 up we were comfortable with our game and Scotland couldn't handle our physicality," he said.

"We'd spoken all week about earning the right to go wide and we did that."

That was certainly the case with man-of-the-match Liam Williams' opening try - a series of drives to the Scottish line culminating in the Scarlets wing diving over unopposed on the left.

The more difficult problem for Gatland is if Wales showed enough in the opening 22 minutes to erase the disappointment of their heavy defeats in England and Ireland.

"We've been very honest with ourselves and we know in this tournament we've been a little bit inconsistent," Gatland conceded.

"Again I thought the players responded exceptionally well today and it was a good display out there."

There is no questioning the dazzling way Wales exploited their extra man.

The real issue for Gatland and his team as they prepare for a summer tour to South Africa is whether the six tries they scored after Hogg's dismissal are more significant than the blanks they returned in Dublin and Twickenham.

What is more immediately measurable, however, is the serious shoulder injury suffered by Wales captain Sam Warburton.

He will have a scan on Sunday and it is feared he will need an operation to repair the damage.

It means Gatland will be without two of his most influential players in the summer, with British and Irish Lions full-back Leigh Halfpenny already ruled out after undergoing surgery on his injured shoulder on Friday.

But Wales' problems pale alongside those of the Scots, who will have new coach Vern Cotter in charge by the time they travel to North America to face the United States and Canada, followed by further June Tests in Argentina and South Africa.

Is the absence of Hogg for an hour sufficient mitigation for their capitulation in Cardiff, or were Wales already getting on top before the incident?

"It wouldn't have been the same result if he'd stayed on," said interim coach Scott Johnson after his last game in charge.

He admitted he thought about reducing his pack to seven to provide a back to cover Hogg, but hadn't taken the decision because of the physical toll the game was taking on his team.

"It's never easy playing against a Welsh side that wants to play expansive rugby but when you're a full-back down it's always going to be difficult. What Wales did today was play to the Plan A we keep hearing about. It's simple - get over the gainline and play an expansive, wide game."

"I didn't want to finish with 13 players - we'd already lost Kelly Brown with a head injury before Hogg went off," he added.

"Full-back is a difficult position to cover, it's easier if a forward goes off. So we did think about it, but decided not to."

Scotland can take some solace from a 20-minute period in the second half when they stopped Wales from scoring and dominated possession.

"You can never question our players' motivation," added Johnson.

But it's scant consolation at the end of a tournament where only their last-minute win in Italy saved them from the Wooden Spoon.

And so, on a day when the eyes of the rugby world were focused on matters in Rome and Paris, history was also made in Cardiff.

The game might have been an afterthought in the context of the tournament.

What it has delivered is food for thought, if little in the way of answers.

Like referee Jerome Garces' view of Hogg's challenge on Biggar, perhaps things will become clearer with the benefit of a second look.