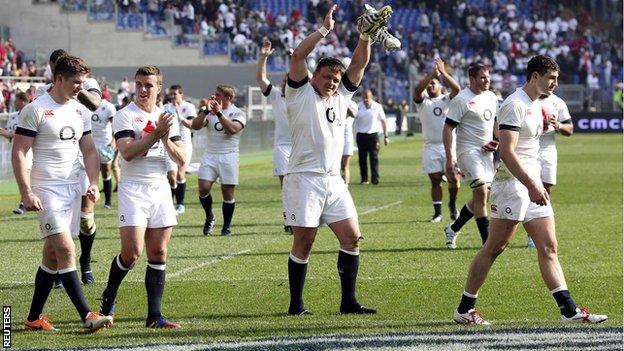 There was a curious mood among the heavy-legged and sore-throated England supporters in Rome on Saturday evening: pleasure in another rousing victory, regret in the party being pooped just a little by Ireland's equally stirring deeds in Paris.

For those able to look further ahead than a toast to the departing Brian O'Driscoll and the hungover flight back to Blighty, there was another sobering notion in the air - the fact that every one of England's next four matches are against the best side in the world, three of them on their own patch.

Many England teams would be rightly fearful of what might follow. Only twice in their history have the men in white won in New Zealand, and only once in the last 40 years. On their last tour six years ago they lost the two Tests by a combined margin of 81-32.

Neither does the opposition ease significantly in the autumn. After the All Blacks come the Springboks, after South Africa, the Wallabies. Only in Samoa do they face a side outside the world's elite.

But this is not many England teams. A year ago, when their Six Nations campaign disintegrated with that 30-3 thumping in Cardiff, second place in the table felt like nowhere.

This year, only a late Gael Fickou try in Paris at the start coming between them and a Grand Slam, second feels like progress rather than standing still. On the pitch they are playing without fear. Off it they feel free of intimidation.

"We are great at this moment in time at taking on a challenge," said defence coach Andy Farrell in the aftermath of the 52-11 win over a struggling Italy.

"They rose to the challenge outstandingly well today. There's another coming up but they're looking forward to it. They've proved time and time again that, when a challenge is put in front of them, they take it on."

Satisfaction and anticipation will both be stirred by the dash and dare displayed at the Stadio Olimpico, even if it was later overshadowed by that dramatic denouement at the Stade de France.

The 41-point winning margin may have fallen a couple of scores short of the tally required to overhaul Ireland's points differential at the top of the tree, and a couple of scores were probably lost to over-ambition and over-anxious hands.

But the combined margin of England's last three wins in Rome was just 13 points. Where the last two brought just one try apiece, in Saturday's warm spring sunshine they ran in seven. Even in victory at Twickenham a year ago they had won by a mere seven points, every one of their scores coming from a kicking tee.

Italy ceded their early scrum advantage, spilled passes when breaking clear and lost their line-out deep in their own territory on two critical occasions.

Yet this was a game won, rather than one thrown away. England had 61% of the possession and 68% of the territory. They made 10 line breaks, broke 25 tackles and forced 14 penalties, playing with ambition, playing with liberation.

With progression has come promotion for the individual stars. Mike Brown ended any arguments about the player of the Championship with his third and fourth tries of the tournament, the 111 metres made on par with the standard of excellence he has maintained from the very start.

One of those tries was created by Luther Burrell, a breakthrough centre who has gone from outsider to assured in two short months. The other served to highlight the growing influence of Owen Farrell with ball in hand, just as the fly-half's eight kicks from eight matched his faultless display against Wales a week ago.

Throughout the team there are settled units playing better than they ever have before for red rose - the second-row pairing of Launchbury and Lawes, the half-back partnership of Farrell and Care, a back row which is better balanced, fleeter of foot and quicker in thought.

In defence they are parsimonious (only two tries conceded in their last four matches); in attack they are finding an edge absent 12 months ago as a campaign that had begun at pace slowly spluttered to a standstill.

And they should improve. The mean age of the starting XV in Rome was 25, an average which drops by another year if one factors in the replacements. The team had only 342 caps between them, the bench 87.

England at the 2014 Six Nations

With each game the experience grows. With each month the team evolves; only six of the starting XV began the corresponding match a year ago, but 12 of them started every match of this Six Nations.

There is a distinct style to their efforts, and an increasing ability to maintain it. And there is depth - not flawless cover throughout the team, but the sort of strength that teams with their forthcoming battles will need to draw on.

Lions stars Dan Cole, Alex Corbisiero, Tom Croft and Geoff Parling are yet to return from injury. Billy Vunipola, outstanding before damaging his ankle against Ireland, will come rampaging back. Young guns Marland Yarde and Christian Wade will fight with Jack Nowell and Jonny May for the wing slots; George Ford will get more game-time to put pressure on his old pal Farrell.

And then there is Manu. No-one is entirely sure where Tuilagi's best position might be, or who from a winning side should make way. But in his crunching cameo, after less than 80 minutes for his club Leicester, it was made quite clear: it has to be somewhere, for natural gifts like this cannot be wasted.

The summer battles in Auckland, Dunedin and Hamilton are of course only the opening dramas in the next chapter. The next Six Nations brings both the succour of three home games and the danger of away trips to Cardiff and Dublin.

Beyond that, in just over 550 days, comes a home World Cup, and a pool from which only two of England, Australia and Wales can escape.

"It's a young team. We haven't got everything right in every game, but the quality of our attack and our set-piece has been excellent. We're in very good shape."

A first title under his command would have garlanded the last two months. But performance means as much as position, as the ill-fated example of the last England side to summit the Six Nations shows - top dogs in March 2011 but eaten alive in Dublin and chewed up in the World Cup quarter-finals a few months further on.

"I'll look back at this Six Nations with great pride and great confidence in us going forward," Lancaster reflected. "I'm really proud of this team."