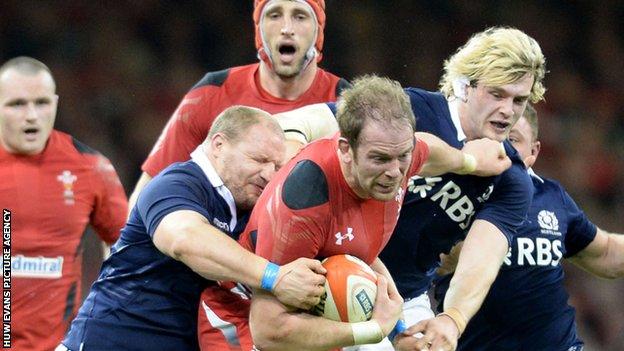 Coach Warren Gatland is already without captain Sam Warburton and full-back Leigh Halfpenny, who both have shoulder injuries, for the two-Test tour.

"Players like Taulupe Faletau and Alun Wyn Jones have been on a Lions tour and play every game for Wales and their region," said former flanker Williams.

"With a World Cup in mind next year I'd give them a break."

Second-row Jones, 28, played in all three Lions Tests in Australia in 2013, captaining them to a decisive victory in the third and deciding match in Sydney.

He only missed one game for Wales in the 2013-14 season, pulling out of the Six Nations match against France with a foot infection.

Dragons number eight Faletau, 23, also toured with the Lions in 2013, and like Jones has played in eight Tests for Wales this season. Both players have made 12 appearances for their regions.

Williams, who made 100 appearances for Wales and played in two Grand Slam-winning campaigns, believes a tough autumn series in 2014 and the World Cup in 2015 means key players need to be rested.

"I think you ought to take every player on an individual basis really because some haven't played that much - but those two in particular I would give them a summer off.

"I'm not saying rest all the players who went with the Lions, just cherry-pick one or two."

Wales play another six Tests in 2014, starting with two against the Springboks in June.

Jones would be a natural choice as captain in the absence of Warburton, who dislocated his shoulder in the record 51-3 win over Scotland.

Scarlets utility back Liam Williams made a big impression against Scotland in the absence of Halfpenny, who also dislocated a shoulder in the 29-18 loss to England.

Gatland is planning to pick a larger than usual tour squad with Wales hoping to play a match against Southern Kings in addition to the two games against South Africa.

Williams is concerned that there isn't the strength in depth in the Welsh game to support such a busy schedule.

"The squad we've got at the moment all the best players are in there," he added.

"There's one or two who will come through, but if you look underneath the Welsh squad in the regional game there's not many players who you would put in there."