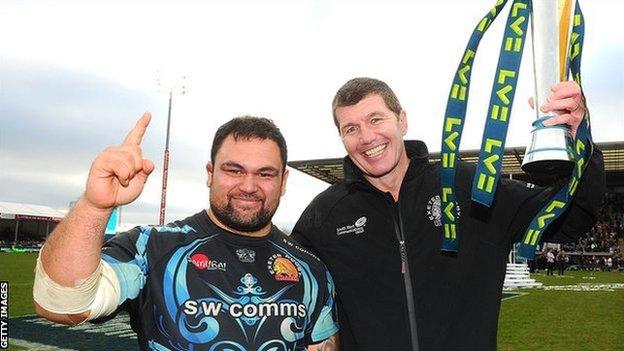 Exeter Chiefs head coach Rob Baxter has urged his side to build on their victory in the LV= Cup final.

The Sandy Park side beat Northampton Saints 15-8 to lift their first major trophy in their 143-year history.

"When we come back together we'll talk about the importance of making this mean something," he told BBC Sport.

"We're at Leicester in the Premiership next week. You have to get your feet down pretty quickly if you don't want to learn some tough lessons."

Exeter's progress has been rapid, winning promotion to the Premiership just four years ago and venturing into the Heineken Cup for the first time last season.

Qualifying for Europe's elite club competition looks an unlikely prospect though this time around, with Chiefs nine points adrift of the top six in the Premiership.

"We don't know how big this game is for us yet," said Baxter.

"If we don't do well for the rest of the Premiership and don't do well next season it's a nice day, but doesn't mean too much in the bigger picture.

"Ultimately I want us back in the Heineken Cup.

"The truth is, this final kind of dropped on us a bit.

"We talked about the Bath semi-final victory [last week] for the first half of the week, and only got on to the excitement of Northampton in the middle of the week."

Saints, the Premiership's leaders, will also turn their attention to the league campaign and an Amlin Challenge Cup quarter-final against Sale on 3 April.

"Exeter played well. It was always going to be tough coming down here with the crowd getting behind the team," said director of rugby Jim Mallinder.

"We needed to be at our best and on this occasion we weren't.

"We're disappointed to lose, but we've got other battles to fight this year.

"We've got plenty to to play for. The Premiership becomes very important.

"We need to make sure we get this home [Challenge Cup] semi-final, because home games are very important, as we've seen here."