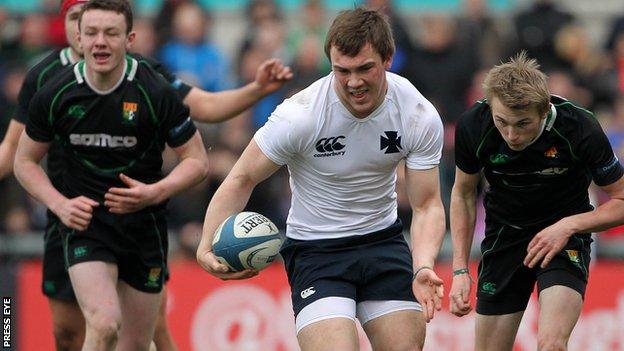 Methodist College won the Schools' Cup for the third year in a row by beating Sullivan Upper of Holywood in Monday's final at Ravenhill.

Johnny Betts revived Sullivan hopes in the second half before Josh Jordan and Rory Cairns scored tries for Methody.

It was a record 37th cup success for Methody, while Sullivan were making their first ever appearance in the St Patrick Day showpiece.

Sullivan had high hopes of pulling off victory, but Methody produced the goods on the big day and deservedly retain the trophy.

Ireland under-19 international McKee, playing in his third successive final, scored the opening try after Methody had declined a three-pointer to kick a penalty into the corner.

From the line-out, they went through the phases to set up McKee who burst through to score under the posts, giving Josh Bingham an easy conversion.

Sullivan responded well but were then caught by a 15th-minute interception by McKee which brought the centre his sixth try of the 2014 competition.

Sullivan winger Jordan got in for Sullivan's first try, taking Dave Cave's pass to score in the left former.

Jordan, though, sustained an arm injury and had to be replaced by harry Harper.

McIvor's try in the 25th minute came after fly-half Bingham had found a gap before passing left for the score.

It put the Belfast boys 17-5 and they retained that advantage for the rest of the half as Sullivan skipper Mark Adair saw a decent penalty chance come off an upright.

Sullivan got right back into the contest when full-back Betts ended a fine move involving Michael Cartmill and Adair. Adair converted the try to cut Methody's lead to 17-12.

Methody, though, produced the stronger finish with wingers Jordan and Cairns getting tries.

Jordan took a nice off-load from prop Ben O'Reilly and the Methody pack drove forward and, in the last move of the game, Cairns finished a flowing backline move by touching down in the right corner.