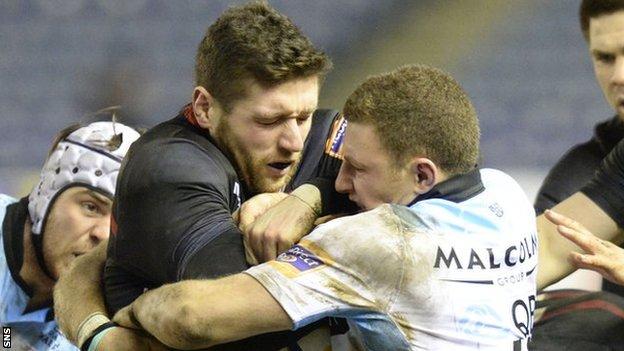 A major sports sponsor says it would like to back the creation of a third Pro12 rugby team for Scotland - based in its home town of Aberdeen.

"I'd love to see a rugby team there of the calibre of Edinburgh or Glasgow, a professional team," chief executive Martin Gilbert told BBC Scotland.

I think we do need to do something pretty radical. We've sponsored Edinburgh and we'd love to have a professional set-up up in the north east

The Scottish Rugby Union disbanded the Border Reivers in 2007 in order to concentrate funds on Edinburgh and Glasgow Warriors.

But the future of the game in the country has again come into focus with the international team once more finishing second bottom of the Six Nations table and ending their campaign with a record defeat in Wales.

Ahead of the 51-3 defeat in Cardiff, former England captain Lewis Moody warned that Scotland, presently ranked 10th in the world, could disappear as a rugby force because it only has two professional sides from which to pick its players.

The city of Aberdeen showed its capability to support its football team on Sunday, when more than 40,000 fans turned out to watch Derek McInnes's side beat Inverness Caledonian Thistle in the Scottish League Cup final in Glasgow.

Gilbert, whose company has sponsored Edinburgh in the past, thinks the north-east would also give its backing to a Pro12 rugby team.

"I think it would be supported up there because you'd get everywhere north of Dundee supportive of that sort of strategy," he said.

"It would be great and we would love to be involved in something like that.

"I think we do need to do something pretty radical.

"We've sponsored Edinburgh and we'd love to have a professional set-up in the north east."

Gilbert's company was Edinburgh's sponsor from 2008 until 2013, when it was outbid by BT Sport.

Gilbert admits he has not been party to any discussions with the SRU about establishing a professional rugby team in Aberdeen.

However, the chief executive fears that the governing body might instead drop one of the two present professional teams because of tightening finances.

"My worry is they'll go the other way and cut even more," he said.

A Scottish Rugby spokesman suggested it would like to create a third team - but only if there was sufficient funding.

"We welcome any dialogue with any individual/s that would enable us to expand our investment in professional teams," he said in a statement.

"Clearly, at present, there would be a number of hurdles that we would have to surmount, including financial and other considerations, to increase from our existing two professional teams."