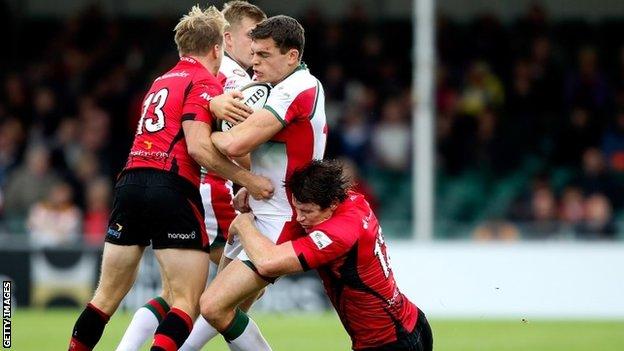 The islanders picked up losing bonus points in their two previous outings, but sealed a valuable win to move 12 points clear of bottom side Ealing.

"Albion play good rugby so we had a huge defensive focus this week and they delivered," he told BBC Radio Jersey.

"I'm just really proud of the players. We needed that win."

Jersey face Ealing, who have been at the foot of the table for most of the season, on Friday in a game which could have a major bearing on this season's relegation situation.

Ben Maidment, James Voss and Mark McCrea scored the tries as they put an end to Albion's winning run.

"It was a real team performance from the backs and forwards," added Biljon.

"We've spoken about sharing responsibility but it goes without saying that the defensive effort and the work we put in at the breakdown were outstanding - they showed real commitment.

"We don't want to get too carried away but if we continue to work as hard as we are and concentrate on ourselves rather than worrying about the opposition then hopefully we'll keep getting results."

Albion head coach James Shanahan said the team's energy levels were "embarrassing" in the first half and the second half recovery from 16-3 down was scant consolation.

"We came back to get a losing bonus point but should we be happy with that at home? Not really," he told BBC Radio Devon.

"We weren't at the races. You have to give a lot of credit to them. They showed a lot of energy and dominated the collisions and thoroughly deserved the win.

"But we were just disappointing - we've had two good performances and two wins and we came home and hoped we could show what we can do and we just didn't do it.

"You could see what it meant to them but I'm frustrated because it should mean that to us even in our position [in mid-table].

"If we're realistically going to push for top six then this is a game we need to be winning and we haven't.

"At half-time I said our energy levels were embarrassing and we'd lost every collision.

"Our discipline was a joke in the first half and that put us under pressure."