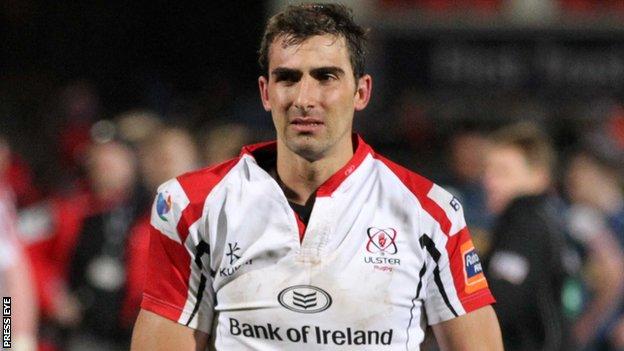 Ruan Pienaar will miss Ulster's Pro12 game against Edinburgh on Friday but his prospects of being fit for the Heineken Cup quarter-final against Saracens on 5 April appear good.

He appeared in some discomfort after the match but the expectation is that he will be fit for the European game.

Callum Black is a doubt for Friday's game because of an ankle injury.

Prop Black was carried off in the first half of the win over the Scarlets after suffering an ankle injury and will under undergo a MRI scan later this week.

Pienaar is a hugely important player for Mark Anscombe's squad and the word suggesting that he should be fit for the Heineken Cup quarter-final will ease the concern of Ulster supporters.

Doak is Anscombe's assistant while Bell is defence coach with Malone fulfilling the roles of skills coach and analyst.

Ulster won all six of their Heineken Cup pool games for the first time in the province's history this season and have won 11 out of 15 Pro12 games.

Anscombe's side boasts the best defensive record of any side in the Heineken Cup this season, having conceded just 20 tries in 21 matches.