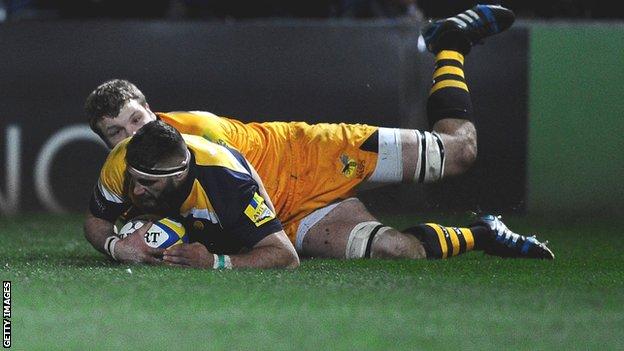 Worcester old boy Andy Goode kicked a last-minute conversion as Wasps handed the Warriors their most heartbreaking defeat of a painful season.

Sam Betty's controversial second-half try looked to have proved the match-winner after Goode had kicked two penalties for a 6-3 Wasps lead.

But Wasps' late pressure told when prop Jake Cooper-Woolley went over in injury time to tie the scores at 11-11.

Worcester have now lost their last 22 Premiership matches - a record stretching back to 1 March last year when their last league win came, ironically, against Wasps.

Wasps were the opposition the last time Worcester won in the Premiership, 29-23 at Sixways on 1 March 2013.

Wasps were also the beaten side the last time the Warriors won an away match in the Premiership, on New Year's Day 2012.

Chris Pennell put Worcester ahead with an early penalty, matched by the first of Goode's two penalties for a half-time scoreline of 3-3.

Goode then added another penalty but, after Betty's try was allowed, despite winger David Lemi seemingly putting a foot in touch, Ryan Lamb then stretched Worcester's lead with a second penalty.

But Wasps put in a barnstorming finish and, camped on the Warriors line, the pressure finally told.

Despite not having won all season in the Premiership under Ryan, Worcester knew that victory would have sent them off to 11th-placed Newcastle next Sunday, knowing that another win at Kingston Park could put them within touching distance of the Falcons with four games left.

But, cheered only by a sixth losing bonus point of the season, Ryan's men were left to rue their fourth defeat by two points or less.

It looked a lot more promising when a bright start from the home side was rewarded by a seventh-minute 45-metre Pennell penalty.

But Pennell's second attempt on 20 minutes from slightly further out wide on the right fell short and left.

Wasps had four former Warriors players in their squad. Former England stand-off Andy Goode and England prop Matt Mullan were in the starting line-up - and Joe Carlisle and Charlie Hayter were on the bench.

After an attempt at a charge-down try from scrum-half Jonny Arr was thwarted in the right corner, stand-off Lamb was off target with a drop-goal attempt.

Wasps had not even made it into the home '22' but, when Worcester were penalised for offside, Goode drilled over an equalising penalty.

Pennell was then just off target again with a third penalty attempt from close to the halfway line right on half-time.

Three minutes into the second half, Worcester were made to pay when Goode slotted a second penalty to give Wasps the lead.

Within 10 minutes, Worcester then got the lucky break that could have transformed their season.

After Pennell's inspiring mini-break down the right put the Warriors on the front foot, a cross-field switch allowed left winger Lemi to go clear.

He appeared to have twice put his foot on the touchline before being brought down, at which point flanker Betty swept up the loose ball to cross the whitewash.

But it was not until after he had gone upstairs that referee Andrew Small allowed the try, Pennell putting the conversion wide - his fourth miss of the night.

After Goode missed with an attempted drop goal, a change of kicker for Worcester brought more luck when Wasps transgressed again on the 10-metre line.

But, just when the home fans had finally come to life as the prospect of that elusive first win started to at last look like a reality, Wasps showed that they had more fire in their bellies than Worcester had bargained for.

Cooper-Woolley crashed over, the try only being awarded after a look at the video. And, just as the Sixways regulars have seen him do so many times, Goode delivered the coup de grace.

"It hurts. We can't hide. It is painful. Sport doesn't necessarily give you everything you think you deserve.

"But I am not going to let us feel sorry for ourselves. I am going to let us get a bit angry, and spend the weekend feeling a little bit tied up with it, and then come back in on Monday.

"We still think we have got a chance in this. It is a pretty tight group - we just don't get the rosy bits at the end sometimes."

"I am really pleased that we found a way to win, really. But in saying that, I don't think we deserved to win the game.

"We defended well and I don't think we were under undue pressure, but with the ball we just looked really nervous. We were edgy, which didn't really allow us to put many phases together and put Worcester under a lot of pressure.

"Sometimes the result is more important than the performance and that was probably a night tonight when it was."