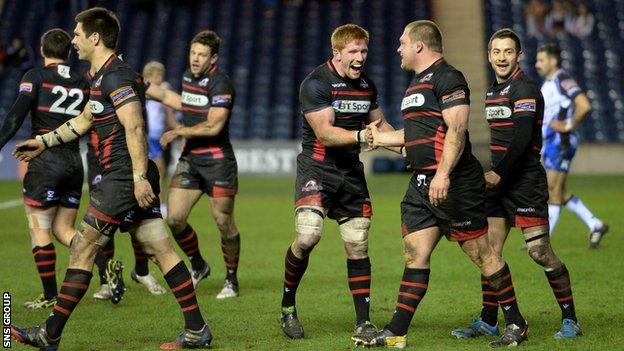 Edinburgh may well need to improve their league position to feature in the European Cup next season.

It is believed a Six Nations committee meeting in Paris on Monday agreed a structure to replace the Heineken Cup from September, if broadcasters Sky and BT can compromise over TV coverage.

Edinburgh are currently eighth, although they have a game in hand on Newport Gwent Dragons.

That fixture is the postponed New Year's Day game with rivals Glasgow, who are currently fifth in the standings.

The future of the Heineken Cup has been in doubt since June 2012 when the top French and English clubs announced their intention to withdraw from the tournament once the current "accord" ran out at the end of the 2013-14 season.

They proposed their own competition, the Rugby Champions Cup, saying they were unhappy with the way teams qualified for the Heineken Cup and the distribution of cash generated by the tournament.

There was also a rift between the four Welsh regions (Newport Gwent Dragons, Blues, Ospreys and Scarlets) and the Welsh Rugby Union - after the regions gave their support to the proposed breakaway Rugby Champions Cup.

Edinburgh finished third in Heineken Cup Pool 6 this season, winning three of their six matches, while Glasgow were bottom of Pool 2 with just two victories.