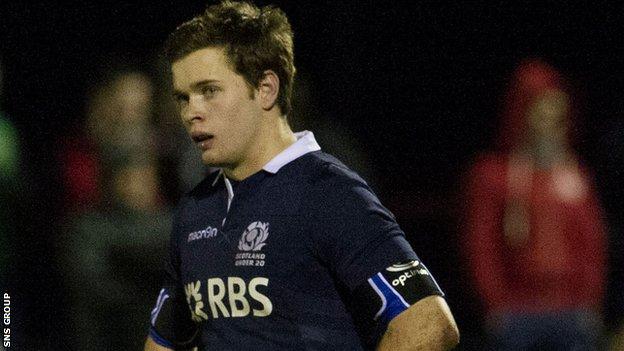 Edinburgh have hailed Chris Dean as one of Scotland's top young talents as they signed the 19-year-old centre on a two-year contract.

Dean has been capped at under-20 level and for Scotland 7s as well as playing for Edinburgh Accies.

"He is a player of real ability and potential. It's great to have a young Scottish talent like that at the club."

I'm delighted with the opportunity to get back into the 15-a-side game, especially with a side I've grown up supporting

Dean is the third Scottish centre to put pen to sign for the capital club in as many weeks and follows the contract extension handed to 21-times capped Matt Scott and the recruitment of former age-grade international Michael Tait from Newcastle Falcons.

The 19-year-old said: "Someone like Matt, who has come through the system, is a real role model - especially in the way his career has skyrocketed.

"I know him quite well and he's certainly someone I'll look to learn from, as well as the other quality players at the club."

Dean has divided his development between the abbreviated game, Accies in the Scottish Premiership and the current Under-20 Six Nations, before winning his first senior professional contract.

"It's fantastic," he said. "I'm delighted with the opportunity to get back into the 15-a-side game, especially with a side I've grown up supporting.

"I've played through all the age grades for Edinburgh, and learned a lot during my time with Scotland 7s, but now I'm really looking forward to this step up.

"Alan Solomons has made it very clear that he's here to build a club rather than a team.

"He's looking towards the future, which is a great because it means bringing young Scots like me into the set-up who will hopefully kick on over the next few years."