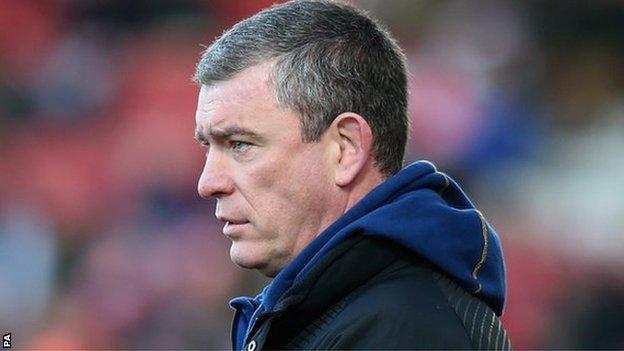 Worcester Warriors director of coaching Dean Ryan insists that their enforced three-week break has proved timely as they prepare for the final run-in.

The Premiership's bottom side have had two spare weekends since losing 21-20 at Harlequins on 26 February.

"Post-Quins, I'm not sure we could have rolled it again and expected the same level of commitment," Ryan told BBC Hereford & Worcester.

"So, in that context, the break has worked. It was the right time for us."

The former Gloucester boss added: "It's been pretty well publicised that were pretty we're low on resources to be able to turn round week-in, week-out.

"There is the balance and continuity of playing, but it was probably outweighed by the greater value of getting the chance to freshen up in readiness for what is a crucial couple of weeks if we're going to survive."

Worcester go into Friday's game against Wasps, followed by the long trip to fellow strugglers Newcastle a week on Sunday, cheered by their narrow defeats against Quins and champions Leicester in February, when they lost each game by just a single point.

But, chiefly, apart from allowing his players an extended rest, their three weeks without a match has also been the chance for Ryan's rejuvenated squad to work more fully with Warriors' high performance director Nick Johnston, following his appointment in November.

"I always felt we were behind the competition in terms of being able to compete physically," added Ryan.

"But we've now got fresh bodies. We've still got to get the tactical preparation right, but it has been a case of maximising all our resources, if we want to jump into this game."

Despite having gone over a year without a Premiership win, having picked up just five bonus points this season, it seems almost unbelievable that Worcester could yet stay up.

But, in reality, it is still achievable.

Ryan's men are just 11 points behind 11th-placed Newcastle. And, if Warriors can emulate their last league win - against Wasps at Sixways, on 1 March 2013 - by beating them at Sixways and following that up with a win at Kingston Park, then the pressure could be put right back on the Falcons.

Asked at Tuesday's pre-match press conference if that makes Friday's game a 'must-win', Ryan replied: "We're not far off. We can't hide from how important this fixture is."