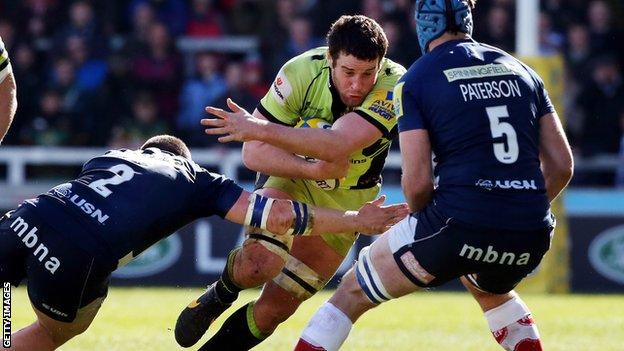 Northampton slipped to defeat at a resurgent Sale Sharks and lost top spot in the Premiership.

The visitors, who began the day two points clear of Saracens in the table, trailed by 13 points at half-time.

Mark Cueto, Welshman Marc Jones and Tom Brady all touched down for Sale in the first period and they produced a solid defensive effort to protect their lead.

Saracens beat Harlequins to climb to the summit, while the Sharks are two points behind fourth-placed Leicester.

But they gave a disjointed performance, despite young fly-half Will Hooley - starting in place of the injured Stephen Myler - kicking an early penalty to put them in front.

Impressive Sale were soon on the scoreboard themselves with an opening try that owed much to Dwayne Peel's incisive running.

The former Wales scrum-half took the Sharks deep into Northampton territory and the ball was worked left to winger Cueto, who dived over for his 86th Premiership score.

Hooley's second penalty reduced the deficit to a single point, but the hosts responded when hooker Jones collected from a ruck and drove over from close range.

Sale centre Sam Tuitupou and Saints captain Hartley were shown yellow cards for their respective roles in a scuffle following Sale's second try, and while both sides were down to 14 men, Brady scooped up Danny Cipriani's grubber kick to cross seconds before the interval.

Northampton enjoyed long spells of pressure in deteriorating second-half conditions but neither side were able to add any further points after the break.

Burrell's break created Northampton's best chance but the opportunity disappeared when Saints and England colleague Tom Wood knocked on and they fell to a second Premiership defeat of the season.

"Does the win give us more ambition? No, not really. This time last year we were scrapping it out for our lives and this year we're just glad to be in mid-table.

"Do I think top four is achievable? I'm not being coy but we see how it is every week and try to challenge the lads to get up for it. The one thing we have got, and what helped us last year, is togetherness.

"We went through it last year and we had to scrap it out and it's served us well. In tight games like today, you need that resolve.

"We've had a rest which is a good thing. Their internationals were tired and they chose to pick them and that's their choice. We know that we were the fitter team."

"It was a poor performance. In the first half we never really got off the coach. Sale scored some good tries and took their opportunities.

"In the second half we improved but we were always up against it because we knew we had to score tries.

"We looked like a side who didn't have any cohesiveness out there because we haven't all played together for eight weeks.

"I don't think it is fitness because our lads are fit. We just couldn't string anything together.

"We've got some important games coming up now. We've lost this game but we're not out - we've got five games and we're still up in a very strong position."