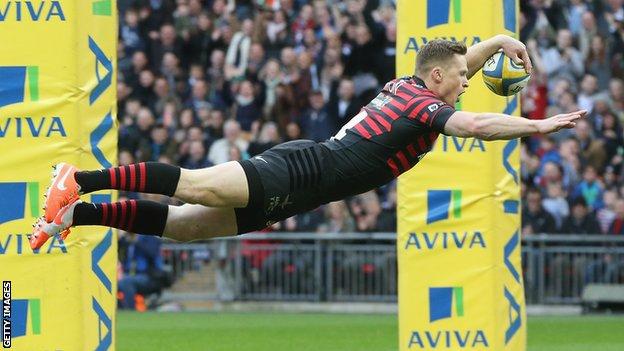 Saracens beat Harlequins to go top of the Premiership in front of a record crowd for club rugby union at Wembley.

Two intercept tries from Chris Ashton and Owen Farrell, alongside a finish from George Kruis, gave Saracens the lead in a first half where Karl Dickson went over for Quins.

Sam Smith took advantage of Steve Borthwick's yellow card to touch down and give Harlequins hope.

Saracens have made Wembley a home away from home in recent seasons, playing there 11 times in the past four years.

That was set when the same two sides faced each other at Wembley in March 2012, with Quins winning 24-19.

This game was the 11th time in four years that Saracens have played at Wembley.

And while the stop-start nature of the game failed to match the anticipation between these two London rivals, the hosts were able to fire a warning shot to any prospective play-off hopefuls in front of an 83,889-strong crowd.

Northampton Saints, league leaders coming into the weekend, suffered defeat at Sale and will be wary of Sarries' growing confidence as the season draws on, with the Barnet-based club now winning four on the bounce.

While Harlequins opted not to start any of Chris Robshaw, Danny Care and Mike Brown, their trio that helped England beat Italy in last week's Six Nations finale, Saracens had no fears about bringing Mako Vunipola into their front line and putting the number 10 shirt back on Farrell.

And it was the fly-half's 17-point contribution that proved so important to Mark McCall's side as they further dented the play-off hopes of their opponents, who could see their four-point gap to the top four increase should Leicester beat Exeter on Sunday.

The start, much like long periods of the game, was subdued, particularly when Saracens wing David Strettle was carried off on a stretcher after just five minutes.

The Premiership's top try-scorer caught a loose arm to the face from Maurie Fa'asavalu in the tackle and lay motionless for a number of minutes before being taken off. Although he re-emerged, smiling, on the Saracens bench after half-time.

The scoring would soon begin though, as Sarries, absorbing Quins pressure, found themselves in front when Ashton collected the ball from Nick Easter's error and stormed 80m before finishing with a trademark swallow dive.

Farrell picked up the extras and landed a penalty, after Nick Evans had put through the posts himself in Quins' first score of the game.

And Saracens had their second try when Kruis headed for a gaping hole at the heart of the Quins defence, rode a challenge from Nick Kennedy and touched down, allowing Farrell to convert.

Dickson had Quins back to within a converted try, taking the ball from the scrum five metres shy of the line and crossing after selling a clever dummy.

Evans was once again precise from the tee, but the fly-half would soon cost his team dearly with a high, looping pass in his own 22 that opposite number Farrell, who had already added another penalty, gladly plucked out of the air and put down for a try, which he duly converted.

Aware that most of Saracens' ascendancy was down to their own errors, Quins quickly made attempts to rescue the situation after the break.

With Sarries captain Steve Borthwick in the sin bin for being too eager at an initial line-out, Harlequins made yards with the catch and drive, before Dickson freed Smith, a late addition to the starting XV after a Tom Williams injury, to cross in the corner, as Evans successfully kicked between the posts.

But the extra man failed to bring any more joy for Quins, who were once again causing themselves problems, falling asleep at a line-out and allowing Schalk Brits to dance away and tee up Burger, who squirmed the ball down for the bonus-point try.

And there was still time for Bosch to go under the posts and Charlie Hodgson to convert as Quins suffered a second defeat in five games.

"I didn't see the angle everyone is talking about, so I can't comment on it.

"It would be foolish for me to say anything. David is OK. He's pretty shaken up but he's OK.

"There is a system that can be used by the officials in this situation. Clearly it wasn't used as well as it could have been.

"In all matches a couple of things go on that probably shouldn't."

Harlequins director of rugby Conor O'Shea on leaving out the trio who played in England's final Six Nations game:

"Mentally and physically I felt it was the right thing for them to have a break. You have to look after players.

"Mike Brown wasn't training on Monday or Tuesday leading up to the Italy game and before that. I spoke to him over two weeks ago and said take the week off.

"With the other two I just thought that after last week we'd give them time off.

"I felt the best thing for their long-term future was to give them the rest. It would have been easy to play them.

"At times we played some good stuff, but we weren't at our best. When we got it right we were pretty clinical.

"It's a happy but frustrated changing room because every time we got our noses in front, we allowed them back into the match."