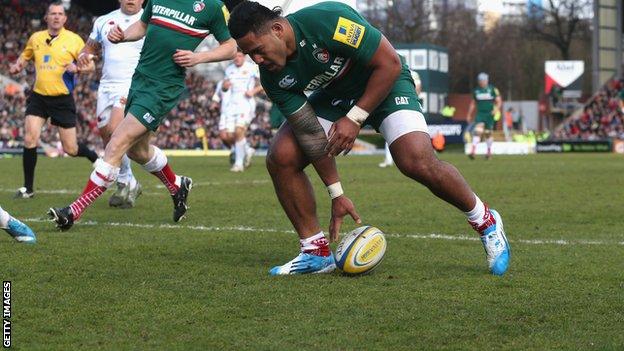 Jack Yeandle and Ian Whitten scored Exeter's tries either side of the break, but the Tigers secured the bonus point through wing Adam Thompstone.

The Chiefs were brought back down to earth with a bump following last week's LV= Cup final win against Northampton as they were outmuscled by an impressive Leicester side.

Leicester's remaining five Premiership matches are all against sides pushing for a top-six finish:

Tuilagi had a simple run-in down the left touchline after he was put in by Goneva.

And Goneva again turned provider, coming off his wing to cut through the middle before switching with Samoa prop Mulipola, who bulldozed his way through England international Jack Nowell to score.

Welshman Williams added a penalty before Exeter responded with a try of their own, Yeandle eventually crashing over after a series of catch-and-drive line-outs near the line.

But their joy was short lived as the hosts hit back straight away.

Ben Youngs found Goneva in space and the winger scythed through before sidestepping the attempted tackles from full-back Luke Arscott and Slade to touch down under the bar.

And things got worse for the Chiefs when skipper Dean Mumm was shown a yellow card for a high tackle on Williams minutes later.

Goneva thought he had secured the bonus-point try just before the break, but it was ruled out for a forward pass; Williams slotted the resultant penalty to end a dominant first 40 minutes.

But Leicester did not have to wait long for the fourth try. Anthony Allen crashed the ball up from a line-out and when it was recycled, full-back Scott Hamilton was able to feed wing Thompstone to go over in the corner.

The visitors showed more urgency in the second half, but it was damage limitation and they were always on the back foot, with Julian Salvi snapping at their heels.

Replacement number eight Thomas Waldrom, who is Exeter bound in the summer, fed scrum-half Mele from close range before the Chiefs worked a consolation score for centre Whitten.

Fittingly, Leicester had the final word, with replacement Mele crossing for his second and the home side's sixth try of the afternoon.

The win sees the reigning Premiership champions consolidate their place in the top four and remain unbeaten in the league in 2014.

"Niki [Goneva] is not under contract to anyone at this point for next season, but we are a long way down the line to sorting that out.

"You saw today, he is enjoying himself - he wants to be part of this team because he likes it, we are a big club, let's not forget that.

"We caught Exeter at the right time.

"We thought if we got it right physically after the couple of weeks they have had, physically and emotionally, we could dominate the gain-line, and we did.

"That was probably as well as we have played ball in hand for a long time.

"That was the cold bath we needed, that shocked us back to reality.

"We were just off and if you are a bit off against a good Leicester side you will pay the price.

"We got knocked out of our stride early on and it took us a while to recover.

"We did but we could not sustain it for long enough, I am hoping it was the shock we need."