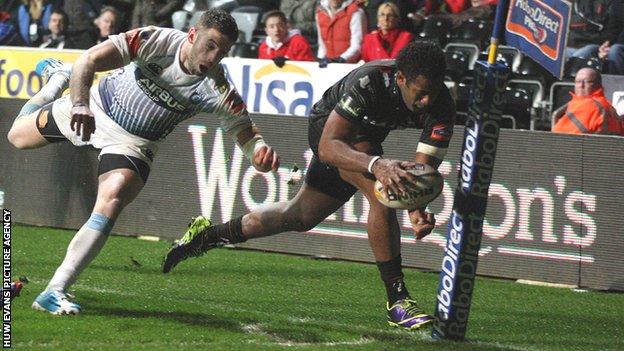 Ospreys gave their Pro12 play-off ambitions a boost with a bonus point win over Cardiff Blues in Swansea.

Fiji international winger Aisea Natoga scored a hat-trick of tries as the Ospreys recorded a seventh consecutive league win over their opponents.

Blues wing Harry Robinson, who is joining Welsh rivals the Scarlets next season, was carried off with an ankle injury late in the game.

The win consolidated Ospreys' place in the top four of the Pro 12 table, though fifth-placed Glasgow can close the gap by beating Scarlets on Saturday.

The Blues' evening was summed up by the difficulties experienced by their Wales wing Alex Cuthbert.

Natoga's success came at his expense, with the British and Irish Lion caught out defensively twice in the first half, and Cuthbert's attempted tackle failing to deny the Fijian a hat-trick when there was little space to work in.

And the only time Cuthbert had a chance to run with the ball in the 76th minute, he was cut down by a superb tap-tackle by Tom Habberfield when a try was beckoning.

But the Ospreys success was built on a dominant forward display led by skipper Alun Wyn Jones - like Cuthbert returning to duty just six days after helping Wales to a record 51-3 win over Scotland in the Six Nations.

And with flankers Justin Tipuric and Sam Lewis dominating the breakdown, the Ospreys were on top from start to finish.

The Blues have a dismal recent record against the Ospreys, and in pouring rain the early omens were bad as they turned over possession at the breakdown and failed to secure their own throw-ins at the lineout.

Beautiful sleight of hand by full-back Sam Davies set up Natoga's second before the interval, with the Blues still in touch as Gareth Davies profited from Ospreys indiscipline to kick three penalties.

Webb's try seven minutes into the second half secured a bonus point for the home team.

In contrast to their hosts, the Blues' attack could not break down an aggressive and well-organised defence even when they dominated possession and territory for a period in the second half.

To underline the difference, Ospreys manufactured Natoga's third try in their first attack for 10 minutes - though it required a brilliant finish by the Fijian.

The Blues remained rooted in the bottom three, with the nature of the loss underlining the task facing caretaker coaches Dale McIntosh and Paul John who were in charge for the first time since the departure of Phil Davies as director of rugby.

And it does not get any easier with their next fixture at home to second-placed Ulster on 29 March.