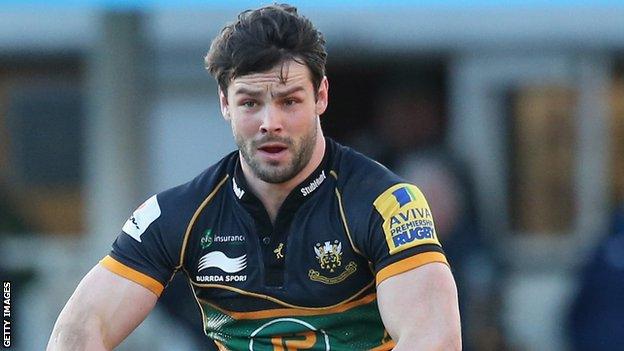 Northampton full-back Ben Foden said he gave up on being part of England's Six Nations campaign to avoid a repeat of last season's long-term injury trouble.

Foden, 28, is recently back from a knee problem, 12 months after an ongoing ankle complaint disrupted his season.

"I tried to push myself back for the Six Nations last season. It got me in all sorts of trouble really," he told BBC Radio Northampton.

"I probably prolonged the injury and made it six months instead of three."

He added: "So this season I put the Six Nations to the back of my mind."

Foden initially suffered an ankle injury in September 2012, but returned for Saints before the turn of the year and earned a place in Stuart Lancaster's England squad for the 2013 Six Nations.

However, he did not feature in the campaign and the Rugby Football Union requested that the former Sale back be rested for a Premiership game with Gloucester during the Championship window in order to manage the ankle problem.

A season later, Foden's Six Nations prospects were once again thwarted, this time by a knee injury picked up in November 2013.

But on this occasion he opted to take his time over his comeback, waiting until this month for his return for the Franklin's Gardens side.

"I need to get back to match fitness. The lungs struggle a little bit," said Foden, who will line up against his former side this weekend when the Premiership leaders travel to Sale.

"But my knee feels good, that's the main thing. I took my time and didn't rush back from the injury.

"I've got full confidence in my knee, so it means I can work on my fitness and hopefully we'll see the Ben Foden of old gracing the Gardens."