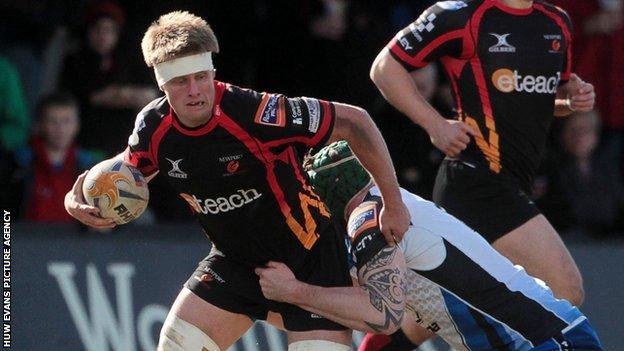 Connacht boosted their chances of making the cut for next season's revamped top-tier European competition with a bonus-point Pro12 win against Newport Gwent Dragons.

Defeat was also a big blow to Dragons hopes of being in Europe's top-flight in 2014-15.

John Muldoon, twice, and Rodney Ah You went over for Connacht tries before Tom Prydie hitting back.

But Aly Muldowney and Michael Swift went on to cross for the visitors.

Victory sent the Irish province into seventh spot in the table while the Dragons fell back to ninth, although they still have a game in hand over Welsh rivals Scarlets, who lie sixth on 36 points - eight more than the Dragons.

Wing Prydie's 69th-minute touchdown was too little, too late for Lyn Jones' side, whose scrum and line-out were ruthlessly exploited by the visitors in telling fashion during the opening period.

But at the next time of asking flanker Muldoon claimed the opening try after an early Jason Tovey had put the hosts ahead.

Muldoon profited from a scrum drive, prop Ah You also went over from close range while veteran Dragons lock Robert Sidoli was in the sin-bin for illegally taking out a Connacht opponent at a line-out.

But even the introduction of Wales and British and Irish Lions number eight Taulupe Faletau early in the second half failed to produce the revival the Dragons truly needed.

After replacement Darragh Leader was sin-binned, the home side were able to work Prydie free.

However, Connacht underlined their dominance with two more close-quarter efforts that added lock Muldowney and replacement lock Swift to the score-sheet.