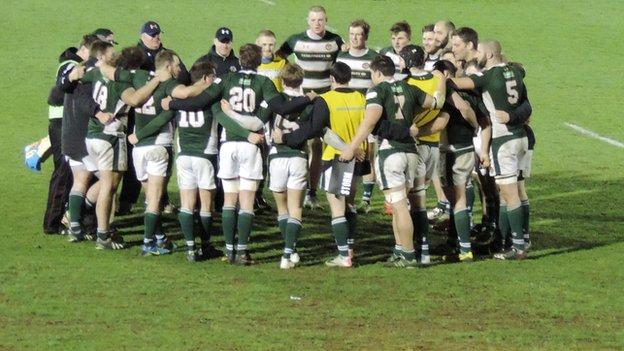 The islanders led through Mark McCrea's early try but the hosts replied with Alex Bradley's touchdown.

Latu Makaafi went over to help Jersey open up a 17-5 advantage but a penalty try narrowed the gap.

Ealing winger Phil Chesters scored in the corner early in the second half to set up their first home league win of the campaign.

Aaron Penberthy and Ben Ward then exchanged successful penalties but as the tension increased neither side could find a further score.

The victory for Ealing narrows the gap on Jersey to nine points with four matches to go this season, with just one side going down.

The game had started brightly for Harvey Biljon's Jersey as McCrea raced clear to score between the posts with the contest only a couple of minutes old. Penberthy converted and followed it with a penalty to put Jersey into an early 10-0 lead.

Back came Ealing though with flanker Bradley driven over the line following a line-out to get his side on the scoreboard.

In an enthralling first half the Channel Islanders claimed their second try largely thanks to good work from centre Drew Locke, whose darting run down the left and kick through saw Tongan forward Makaafi score in the corner. Locke would have grabbed the try himself had he not been illegally taken out as he chased the kick.

Chesters was shown a yellow card in the aftermath of the incident as Penberthy converted to stretch the visitors' lead to 12 points.

Ealing knew they needed a win though to have any realistic chance of avoiding the drop, and a penalty try awarded by referee Matthew Carley as their scrum drove towards the line kept them in contention at the break.

Less than two minutes into the second period and Ealing were level. Jersey had prop Nick Selway in the sin bin, and the hosts made the numerical advantage count as the ball was worked wide and Chesters sprinted in for his 11th try of the season.

Ward converted and Ealing were in front for the first time.

A Penberthy penalty briefly put Jersey back ahead, but his opposite number Ward replied and despite late pressure from both sides the defences remained firm for the remainder of the clash.