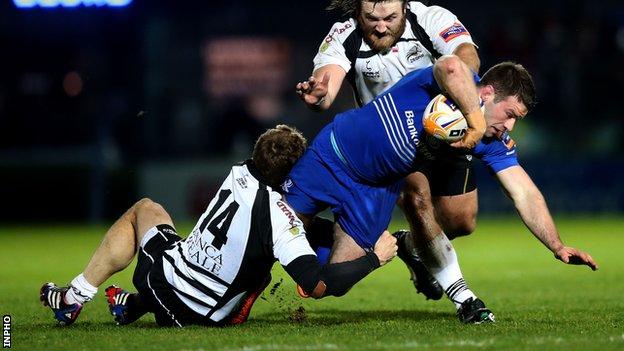 As Leinster struggled for fluency in the first half, they led only 8-0 at the break after a Noel Reid try.

Jordi Murphy's injury-time try sealed the bonus point for the home side.

There were five players included from the Ireland squad that claimed the Six Nations title in Paris, with Fergus McFadden, Ian Madigan and Murphy all starting with Martin Moore and Eoin Reddan used off the bench.

Leinster settled for an early three-pointer from Madigan after bulldozing runs from Murphy and man-of-the-match Richardt Strauss.

He had another unconvincing strike in the 22nd minute, after a good kick chase from Giulio Toniolatti and a subsequent collapsed maul.

Leinster wing Darragh Fanning missed an opportunity to release Reid from a Madigan cross-field kick and it was one of a number of breaks that the province failed to finish off.

The same attack ended with Zebre fly-half Iannone being penalised for hands in the ruck and referee Marius Mitrea reached for his yellow card.

With Zebre down to 14 players, the Leinster pack built through the phases before Reid stepped inside two defenders to touch down to the left of the posts.

Fitzgerald, the game's most dangerous runner, was fed by replacement Reddan to dive over in the left corner on 59 minutes following a powerful line-out maul.

Madigan, celebrating his 25th birthday and his 100th Leinster cap, nailed a terrific conversion from the touchline and the home side quickly added their third try with Fitzgerald scoring again after a wraparound move between the fly-half and Shane Jennings.

Leinster produced late pressure as they chased a bonus point and it came in the final play of the game as recent Ireland debutant Murphy completed a rolling maul.

Replacements: A Dundon for Strauss 67, M Moore for Furlong 30, T Denton for McCarthy 62, S Jennings for McLaughlin 57, E Reddan for Boss 57, J Gopperth for Reid 72, B Macken for Fitzgerald 67.