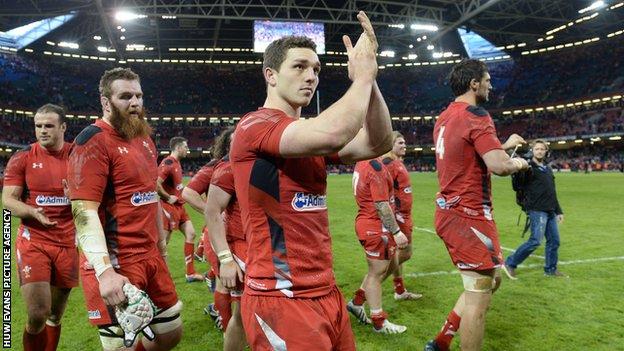 Former Wales fly-half Arwel Thomas would be in favour of a Probables v Possibles match before the summer tour to South Africa.

The Welsh Rugby Union are discussing staging the match at the end of May.

"Injuries have got to be something you've got to consider but I think all in all, with that gap, it would be a good opportunity to get a game going."

Ex-Swansea player Thomas, who won 23 caps for Wales, played in a Probabes v Possibles match at Swansea's St Helen's in 2000 during the reign of Graham Henry.

Proposals for a similar match at the end of the season are being considered by the WRU should none of the Welsh regions reach the Pro12 play-offs.

If agreed within the WRU, the governing body would need to discuss it with Wales' four regions - the Dragons, Blues, Ospreys and Scarlets.

Wales will face South Africa in the first Test in Durban on 14 June and a second Test a week later in Nelspruit.

Wales are also planning a match against a provincial side, likely to be the Southern Kings at Port Elizabeth, with head coach Warren Gatland keen to give more players a chance of playing.

Gatland will be without captain Sam Warburton and full-back Leigh Halfpenny, who both have shoulder injuries, for the tour