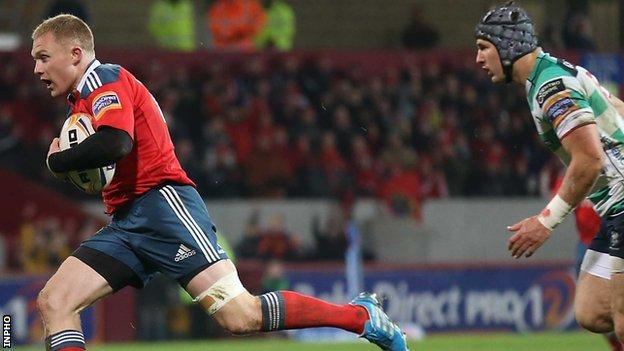 Munster replaced Ulster in second place in the Pro12 by maintaining their 100% record in the competition at the expense of Treviso.

The only bright point for Munster in a dour first half was Keith Earls' 37th-minute try which put them 7-3 ahead.

Ireland captain Paul O'Connell didn't play because of a shoulder injury, although he did appear on the pitch at half-time with the Six Nations trophy.

Treviso had beaten at home earlier in the season and they took a third minute lead in Limerick thanks to a 35-metre penalty from Mat Berquist.

Munster's JJ Hanrahan missed two penalties and Berquist was also wide before the Irish side conjured up a timely opening try.

Fly-half Hanrahan broke through the middle and fed Earls for a smart finish past the covering Ludovico Nitoglia.

A second missed penalty from Berquist added to the Italians' frustration.

After half-time, Munster upped the ante in the scrum, winning a series of penalties in the Treviso 22, and the pressure told when repeated early pushing led to hooker Giovanni Maistri being yellow carded.

The hosts moved 14-3 clear when Hanrahan passed for big centre Downey to duck under Christian Loamanu's challenge and score by the left corner flag.

The increasingly influential Hanrahan then nailed his most difficult kick of the night from the touchline.