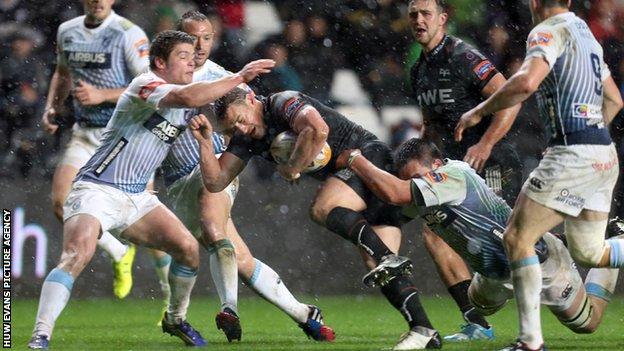 Cardiff Blues paid a heavy price for wasting possession in the 34-9 defeat by Ospreys, according to caretaker coach Paul John.

The former Pontypridd and Cardiff RFC scrum-half and his old Sardis Road team-mate Dale McIntosh were in charge for the first time since the departure of Phil Davies as director of rugby.

And John admitted it was a tough baptism.

"I'm struggling to remember some good things from the game for us," he said.

It was the Blues' fifth consecutive defeat in the Pro12, and their seventh in a row against their Welsh rivals.

They have now slipped to 10th in the table - 27 points behind the Ospreys, who are the top-placed Welsh region in fourth place.

"That's the most disappointing [Blues] result of the season for me. It was worse than the loss to Exeter and the defeats by Zebre. The Blues didn't fire a shot out there."

John - who coached Wales to the World sevens title in 2009 - said the players had to improve their game management, with their next opponents second-placed Ulster at Cardiff on Friday, 29 March.

"I think the first four or five times we had the ball in the first half we gave it straight to the Ospreys," he said.

"And they scored three tries from it so you're chasing the game and they're a top quality side and you can't do that.

"We've got to work hard. We play against Ulster next weekend it's a home game and we got to come away with a bit of passion and show a bit of pride in the jersey they're wearing and pride in their own performance - that's the main thing."

John and McIntosh were appointed caretaker coaches following the resignation of Davies in early March.

This season the Blues have lost twice against Zebre - including the Italian side's first win ever in the league - and conceded 44 points against Exeter in a Heineken Cup match.

They are the bottom-placed of the four Welsh regions in the Pro12 - four points behind Newport Gwent Dragons, who have two games in hand.

They have also been hit by injuries to Wales internationals Sam Warburton, Leigh Halfpenny, Bradley Davies and Rhys Patchell.

And former Wales captain Matthew Rees has only recently returned to training after undergoing treatment for testicular cancer.

Paul John remains determined: "It's disappointing at the moment, but it's five games to go," he said.

"A win would help everybody. The boys are working hard. The training has been going well it's just having to do it against quality opposition.

"It's that patience with the ball, it's valuing possession more and it's just doing all those things well, coping wisely and just managing the game better."