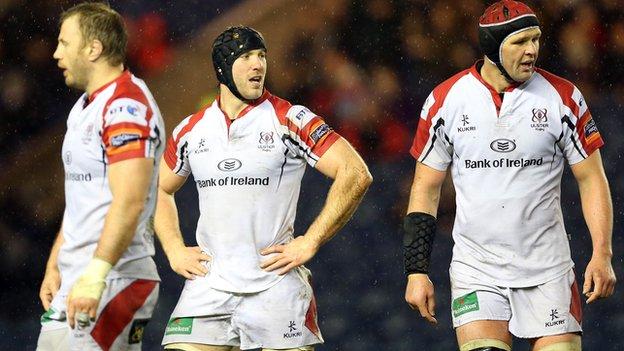 Stephen Ferris wants to keep proving his fitness for Ulster by playing in next week's Pro12 game in Cardiff, even though the Arms Park has a 4G pitch.

Ferris has recently returned from an ankle injury sustained in November 2012 and hopes to play in Ulster's Heineken Cup quarter-final against Saracens.

To give himself a chance, he feels he needs more game time against Cardiff.

"I'm not sure what the situation will be with playing on a 4G pitch, but we will talk about it this week," he said.

Ferris made his first appearance in over 16 months coming off the bench against the Scarlets last week and started in the 9-3 win over Edinburgh on Friday night, playing the entire first half at Murrayfield.

"From a personal point of view it went really well," he said.

"Last week it was a little bit more open, the ball was being thrown around, but it's nice to do a few hard yards, especially on a big pitch like Murrayfield."

The 28-year-old said that after three operations on his ankle last year, he no longer has pain in the joint during games.

However he is still nursing his way back to full health and admitted he is "not out of the woods" with his recovery, having to manage his training work-load as he attempts to build up his fitness levels to get through a full game.

"Obviously there was a few ups and downs along the way but since the third operation it's been one way for me," he said.

"I've been doing so much running that it was just about taking the pitch, and I got to do that last week in front of my own fans.

"I'm not sure what the situation will be next week with Cardiff playing on a 4G pitch but it would be good to maybe get another half an hour off the bench or something like that to give myself a chance (to play against Saracens).

"It's tough when you come on for 20 minutes or 40 minutes to get momentum and it's tough to find form, especially when I've been out for so long.

"We know the next few weeks is building up to Saracens and hopefully we can keep it going with another win next week."