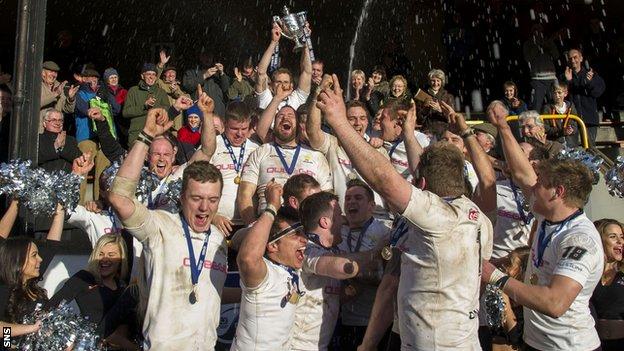 Melrose were crowned Scottish champions in dramatic fashion, with the title being decided in the final seconds of the 2013-14 campaign.

Gala only needed to defeat defending champions Ayr at home to secure the RBS Premiership trophy.

But David O'Hagan's conversion of Opeta Palepoi's 88th-minute try gave the visitors a 34-33 victory at Netherdale.

Three miles away, Melrose had already done their bit by beating Currie 26-10 at the Greenyards.

Delighted Melrose head coach John Dalziel told the Scottish Rugby Union website: "This is a good group of players who have come together and been consistent throughout the year, even when club captain Fraser Thomson has been out for the majority of the season.

"Our focus today was Currie, we knew we needed to win it and that was all we had control over.

"But I can't imagine how Gala must feel losing by a point. I always knew we were capable of achieving this."

Meanwhile, Marr won Championship A after a 12-7 win over second-top Cartha Queens Park and Jed-Forest secured Championship B with a 48-14 win over Lasswade.