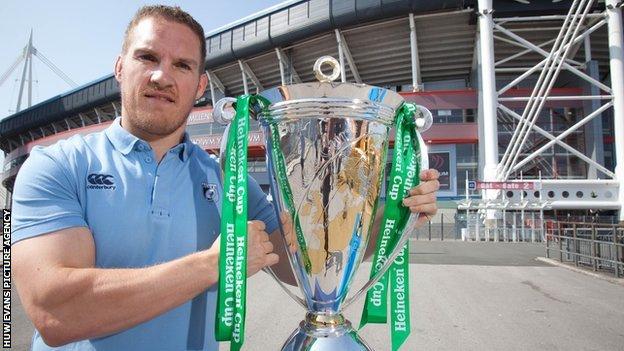 The former Wales and British and Irish Lions fly-half, told Scrum V money will be more equally shared among the teams involved.

Davies, who has not been directly involved in talks, said: "I'm glad to say that we're just about there."

Davies says the deal that is set to be ratified in the coming weeks could have been finalised in October, 2013.

But he welcomed the recent progress involving officials from Europe's leading nations and club competitions.

"A lot of progress has been made," said Dragons chief executive Davies, whose Welsh rivals are Cardiff Blues, Ospreys and Scarlets.

"It's been well-publicised in the press a resolution has been found, not before time.

"All the clubs, all the regions - the whole game, has almost imploded over the last nine months.

"So I'm glad to say we're just about there in terms of what was put on the table back in October, but it's taken a few months to get there.

"We have to be positive now and look to continue a very vibrant European competition."

If the new European deal is ratified, the qualifiers, based on current league positions, would be:

He added: "There's a fairer distribution [of money] - that's the important thing, and various formulas have been considered, discussed, thrashed around, which reflects greater meritocracy in distribution."

The future of the Heineken Cup has been in doubt since June 2012 when the top French and English clubs announced their intention to withdraw from the tournament at the end of the 2013-14 season.

They proposed their own competition, the Rugby Champions Cup (RCC) and said they were unhappy with the way teams qualified for the Heineken Cup and the distribution of cash generated by the tournament.

There is also an unresolved rift between the four Welsh regions and the Welsh Rugby Union - after the regions gave their support to the proposed breakaway RCC.

The terms of the agreement, thought to have been struck in Paris on 17 March, would make it much tougher for Welsh regions to qualify for the top-flight European competition in future.

That has led to criticism it is too easy to qualify from the Pro12, with teams able to rest key players for league matches ahead of big European games.

A second-tier tournament involving 20 teams to replace the Amlin Cup is also expected to be announced.

And a third-level competition involving teams from emerging nations such as Georgia, Spain, Portugal and Russia could also be established.