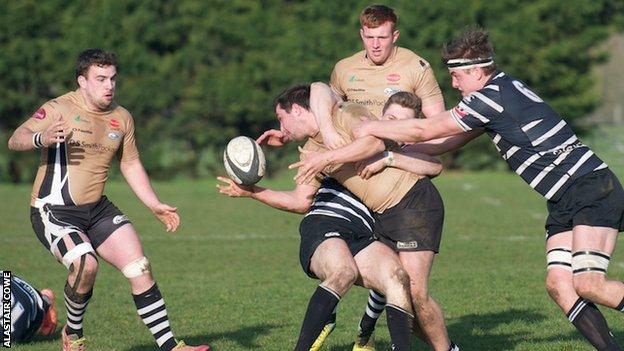 Launceston captain Tom Rawlings says he is "proud" of his players after they got their first win since the sacking of head coach Cliff Rainford.

Rainford after a series of defeats left them just a point above the National Two South relegation zone.

But tries from Nielson Webber and Ryan Westren helped them to a 15-10 win over Taunton at Polson Bridge.

"I'm really proud of the guys and we've just got to step it up again now," Rawlings told BBC Radio Cornwall.

The Cornish All Blacks are now three points clear of third-from-bottom Dings Crusaders, with the two sides still having to meet on 12 April.

"It's been a very tough last four or five weeks and it was a great performance, we couldn't have asked any more from the guys," Rawlings added.

"We said before the game 'let's take the pressure away and where we are in the league away, and play some rugby and enjoy it'.

"In previous weeks we've found ourselves arguing, bickering and having a go at one another.

"But we were a completely different outfit today. That's something we've got to take a serious look at, but it's hopefully onwards and upwards."