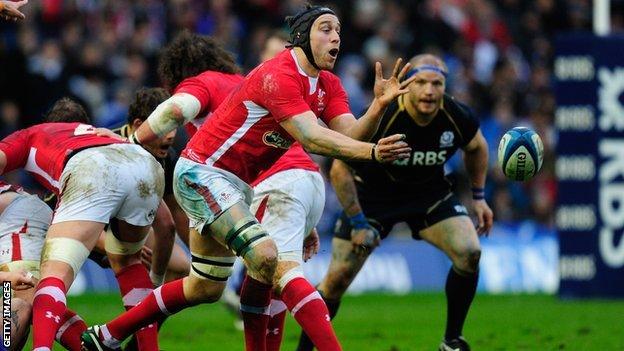 Capped 75 times by his country, with a record 33 as captain, Jones has won three Grand Slams and featured for the British and Irish Lions in 2005.

The 33-year-old - who can play number eight, blindside flanker and second row - has made 147 appearances for Ospreys since his debut in 2004.

He will link up with Andy Robinson's side at the end of the Pro12 season.

"Ryan's arrival indicates the ambition that Bristol has and the quality of players we are capable of attracting," said director of rugby Robinson.

"To captain your country a record number of times and to play for the British & Irish Lions is no mean feat - what Ryan has achieved in his career so far is remarkable.

"His influence - on and off the field - will be significant for us, both during the play-offs this season and next. Ryan is hungry to help Bristol move forward and drive our progress."

Jones missed this year's Six Nations because of a hamstring injury but has now returned to action for his club.

He becomes the third Welsh player to sign for Bristol for next season, joining Ospreys team-mate Matthew Morgan and Sale scrum-half Dwayne Peel.

The West Country side top the second tier of English rugby by three points and have all but secured a play-off place, as they look to return to the Premiership after a five-year absence.

Jones added: "I'm delighted to be joining Bristol. I'll be looking to use my experience to help the team and contribute to the success of the club.

"The vision of Bristol, the passionate fanbase, and the direction that the club is going is a huge attraction for me.

"I want to test myself at the highest level in the English game, and I'm determined to achieve that as a Bristol player."

Jones will be available to play for Bristol if they progress to the two-legged Championship final and Ospreys fail to make the Pro12 play-offs.