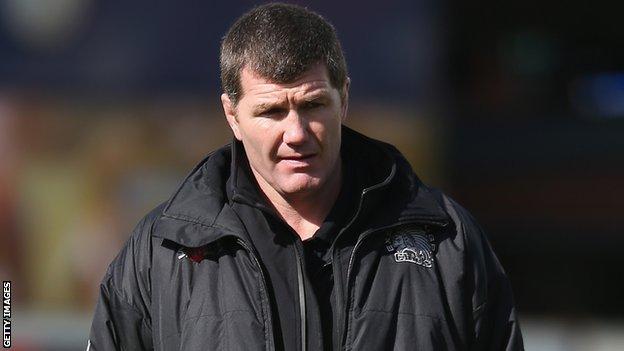 The Chiefs lost to stay eighth in the Premiership.

The defeat came seven days after by beating Northampton in the final at Sandy Park.

"I think if anything we were emotionally and mentally tired," Baxter told BBC Radio Devon after the match.

"I don't want to make excuses for the players - if you want to be a good player playing in a good side then you have to be able to roll from big game to big game.

"We haven't had the experience of that before and you can't run away from that, but I am a little disappointed that the difference was as big as it was."

The defeat was Exeter's 10th in the Premiership this season and leaves them 11th in the table, 11 points off Harlequins, who occupy the final Heineken Cup qualification spot.

"If there's anything good coming out of today it'll certainly have freshened up anything that was lingering around the Northampton game," Baxter added. "It was like a cold bath.

"Physically they're the same rugby players. You've got to question that they haven't bounced through the last couple of weeks as well as Leicester, who've rested up."