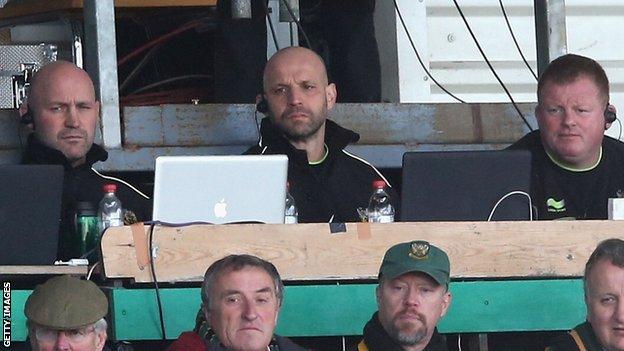 Northampton Saints director of rugby Jim Mallinder insists they are "not down and out" despite back-to-back defeats for the first time this season.

Saints suffered a surprise 19-6 defeat by Sale Sharks on Saturday, having lost in the LV= Cup final to Exeter Chiefs the previous weekend.

Northampton face the three other teams currently occupying the play-off positions in their remaining five matches:

"We didn't have much time [together] last week after a Sunday game."

Mallinder, whose side went down for the first time in 12 Premiership matches despite welcoming back their contingent of Six Nations internationals, continued: "We've not been together as a team for eight weeks and we didn't gel.

"Luther Burrell has been playing at outside centre for a long time and Will Hooley's not played many games at fly-half - it was probably only his second proper game there.

"I was pleased with Will but it was difficult for him.

"The players are disappointed we didn't play together but we'll spend a lot of time on the training field this week."

Saracens beat Harlequins at Wembley to take back the top spot in the table, but Saints remain in second and well on track to secure a play-off semi-final berth.

"We're not down and out and we're still in a very good, strong position to qualify - hopefully with a home semi-final," said Mallinder.

"We need to get back on track and work together as a team. We can certainly get a lot better."

Leicester Tigers are the visitors to Franklin's Gardens next weekend and Hooley says they will be fully prepared to meet their East Midlands rivals with a better performance.

"Whether we're middle, bottom or top of the table, it's a big game," he said.