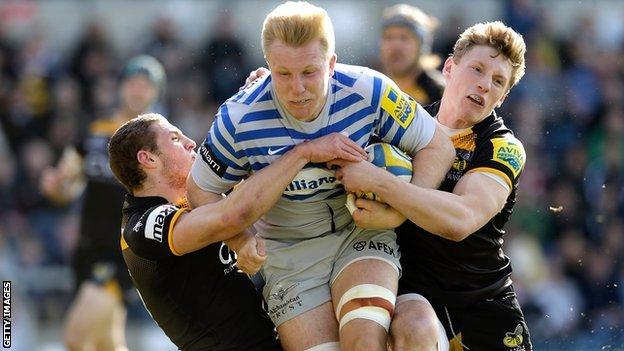 Despite Mouritz Botha's sin-binning, Sarries led at half-time after Jackson Wray and Jamie George crossed either side of Jonah Holmes' maiden Wasps try.

Wasps' Tom Howe scored to make it 13-17, but Alex Goode flew over and George then secured Saracens a bonus point.

Sarries were able to stretch their lead at the Premiership summit thanks to Leicester Tigers' victory at Northampton.

Wasps' faint hopes of reaching the end-of-season play-offs are seemingly over as defeat means they remain seventh, 16 points adrift of the top four.

They had an extra gear than us. Their thought processes were better and whenever we punched them they came back with two

Both sides rang the changes from their last outing, and despite seven alterations, Saracens continued their impressive form as they controlled the game throughout.

A try soon followed as Duncan Taylor burst through the line and played in Wray, who held off the attentions of two tacklers to score.

Saracens lock Botha was yellow-carded on 26 minutes for pulling down a maul, and the hosts quickly cut the deficit to two points in his absence.

Goode kicked the resultant penalty before wing Holmes - making his first appearance since returning from a loan spell with Leeds - capitalised on a Chris Ashton error to cross.

Ashton appeared to misjudge scrum-half Joe Simpson's swirling kick, causing him to stumble and miss the ball, allowing his opposite number to slide in for his maiden Premiership try.

Despite the man advantage, Wasps were largely camped in their own 22 whilst Botha was in the sin-bin, and their defence held firm until his return sparked an immediate score.

He helped drive a maul towards the Wasps' try-line, where hooker George emerged with the ball to touch down. Hodgson added the extras to make the half-time scoreline more reflective of the league leaders' dominance.

A fabulous break and offload from Simpson shortly after the restart allowed replacement centre Charlie Hayter to feed Howe, and the young winger squeezed over to score in the corner on his Premiership debut.

Wasps' Goode then missed his third kick of the day, and moments later his namesake Alex flew over to snuff out any chance of an upset. The England full-back showed great footwork to stroll through several tackles to go in under the posts.

By this time, first-choice half-back pairing Richard Wigglesworth and Owen Farrell had been introduced, and England's number 10 added the extras and a penalty before helping raise Sarries' intensity to secure a bonus-point win.

Wasps replacement Sam Jones was yellow-carded and Farrell kicked the penalty deep into opposition territory before, once again, George was the beneficiary of an unstoppable maul.

However the hosts rallied, having the final say when Festuccia scored from close range.

"They had an extra gear than us. Their thought processes were better and whenever we punched them they came back with two.

"I tried to freshen it up and our attacking play was much better, but they were too powerful for us.

"We left a few points out there with missed kicks and, late on, Jonah Holmes should have scored a second try and he will view that as one that got away."

"It is a difficult place to come but a bonus-point win is a great result for us.

"It wasn't a perfect performance from us, but we were pretty formidable up front and clinical in taking our chances.

"We switched off a couple of times, which you can't afford to do against someone of the quality of their scrum-half (Simpson)."