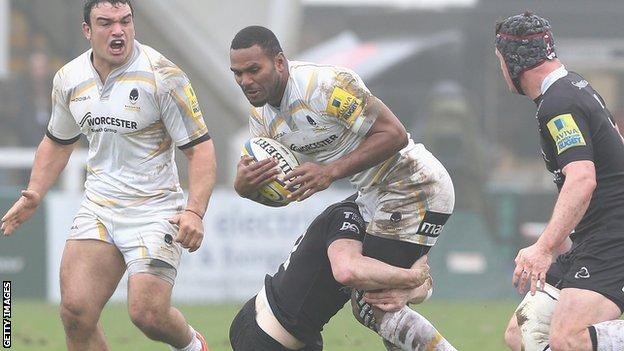 Worcester battled to victory at Newcastle to end a 22-match Premiership losing run and keep their faint survival hopes alive.

The Falcons led 9-6 at the break thanks to three Phil Godman penalties, with two from Warriors' Chris Pennell.

Godman struck a fourth kick in between two from Ryan Lamb to leave the match delicately poised at 12-12.

But replacement centre Andy Symons made a break to put winger Josh Drauniniu away for the crucial match-winning try.

Worcester are now nine points behind the Falcons, who have lost their last 12 league matches, with four games remaining.

But with the Warriors facing away trips to Saracens and Bath, it still looks likely they will be relegated to the Championship.

From the beginning of the game, the importance looked to be hampering both teams, with signs of nerves in a dour first half that offered few, if any, real try-scoring chances.

The Premiership's bottom three with four games to go

Home fly-half Godman opened the scoring with the first of three first-half penalties, but Worcester took the lead, Warriors skipper Pennell slotting two long-range kicks of his own.

It was an error-strewn, forgettable first 40 minutes with neither team able to take control of the game.

The second half was a far more entertaining affair with both teams trying to keep the ball in hand, and Worcester levelled the match with Lamb atoning for a simple miss before the break to notch his first penalty.

The game's decisive score came on 70 minutes when Symons showed a dummy to Newcastle replacement fly-half Joel Hodgson, broke through the line and linked up with Fijian winger Drauniniu, who had the simple task of crashing over the line.

Lamb missed the conversion from the touchline to ensure a nervous last 10 minutes, but Worcester saw the game out to claim their first Premiership win in 13 months.

"It was a bit of a lucky try for them that sealed it with a missed tackle down our right-hand side and it could have happened both ways to be honest.

"It wasn't a great game in any way shape or form, just very disappointing the way it was played.

"We felt the pressure a little bit and because of that there were certain inaccuracies that crept into our game. We simply didn't play well - that's the disappointment."

"I'm delighted how strong they stayed as a team. We haven't disintegrated.

"I'm just really pleased for the players. We've had a couple of really rough rides in recent weeks.

"We've got some tough opposition to come, but let's see what a win does to us and if it takes off that suffocating pressure we've been under.

"The players want to make it really difficult for anybody. We know we have to pull off a miracle match somewhere, but you never know."