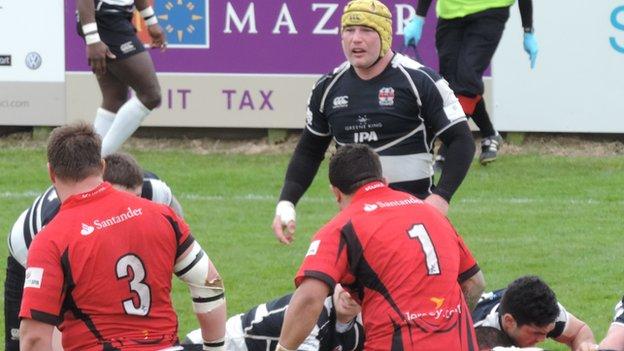 Jersey's Championship struggles continued as mid-table Moseley stormed away in the second half to secure a 39-8 thumping of the islanders.

Anthony Carter's early try set the visitors on their way but Grant Pointer hit back for Jersey.

A hat-trick from Moseley winger Simon Hunt after half-time, including two interception scores, helped his side pull away though.

Matt Williams went over at the end to complete a comprehensive victory.

The encounter had looked like a much closer one in the first period, with the islanders in front at 8-7 before the Birmingham-based outfit notched up 32 unanswered points.

They were ahead early in the game when full-back Carter broke free and despite a last-ditch tackle was able to reach out for the line and open the scoring.

The hosts replied when Pointer latched on to Niall O'Connor's awkwardly-bouncing cross-field kick to cross the whitewash.

O'Connor - who started the game after Aaron Penberthy was injured in the warm-up - struck with a penalty not long after to give Jersey the lead but Moseley fly-half Ollie Thomas showed similar accuracy to put his side ahead at half-time.

Moments after the break Moseley gave a hint of what was to follow when Hunt grabbed the first of his three tries.

The Channel Islanders were their own worst enemies, giving the ball away near their own line for Hunt to intercept and score his second before flanker Latu Makaafi was shown a red card following a scuffle.

Hunt intercepted again soon after to complete his hat-trick and seal a bonus point for his team as Jersey finished with 13 men with replacement prop Jon Brennan sent to the sin ban late on.

There was still time for winger Matt Williams to extend Moseley's lead, making the most of the numerical advantage with a late converted try in the corner with the final move of the game.

The Channel Islanders remain nine points off the foot of the Championship table, but bottom club Ealing have a game in hand.

Meanwhile Moseley, who had former Jersey coach Ben Evans in their line-up, move above Plymouth Albion into seventh spot and are guaranteed another season in the second tier.